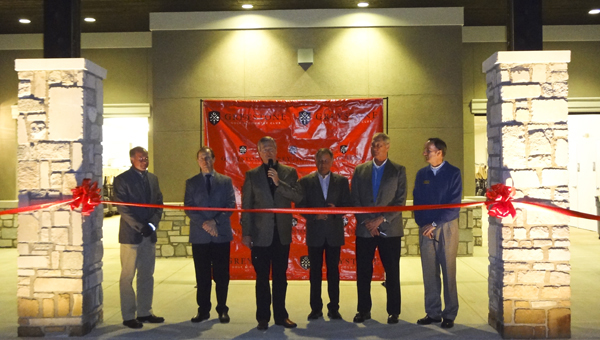 HOOVER – Dozens of Greystone Golf and Country Club members gathered at the Founders Clubhouse the night of March 6 for “Cocktails in the Plaza” to celebrate the grand opening of the new Golf Operations Center and Founders Plaza.

Following a ribbon cutting ceremony in the Plaza, members were allowed to walk through the 9,500-square-foot Golf Operations Center, which houses golf carts, laundry, bag storage and club maintenance.

“Those two projects are the fulfillment of the first part of our dream,” Club President Roy Sewell said. “It’s really exciting.”

On March 21, a second grand opening celebration will take place at 4 p.m. at the Legacy range for the Golf Performance Center, which will house Greystone’s instruction programs.

Sewell said Greystone’s board of directors brought forward the concept of the project and surveyed members to determine whether they supported it.

“It’s been well over a year since we had the vision of what we wanted to do and reached out to the membership,” Sewell said. “We had a resounding vote of support and approval to move forward. It was a tremendous endorsement.”

Construction started in July 2014, and the completion of the Golf Operations and Golf Performance centers comes nearly a year before Greystone will host the 2016 Regions Tradition golf tournament.

The next phase of the project involves renovations to the downstairs level of the Founders Clubhouse to create a 4,000-square-foot fitness area, a 90-person capacity restaurant and an upgraded kitchen.

“There’s a lot of excitement for the next phase,” Sewell said. “I think it will be a good recruiting tool.

“Membership retention is always an important aspect,” Sewell added. “It allows people to see where their investment is coming to a reality.”

FROM STAFF REPORTS A new Alabama cottage food law, which went into effect June 1, 2014, allows anyone to sell... read more