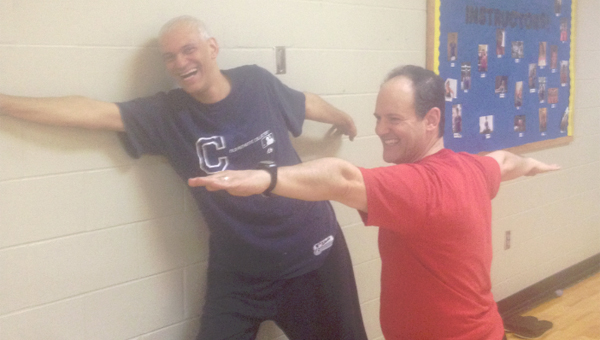 CALERA – When Tim Beiro of Calera walks into the Pelham branch YMCA, people take notice. Everyone knows his name and seems impressed by his voracious work ethic. Beiro is in his 50s and is battling a debilitating disease known as CIDP, an acquired immune-mediated inflammatory disorder of the peripheral nervous system. The disease, as it progresses, makes it increasingly difficult to walk and obtain balance and coordination. Undeterred, Beiro has a smile on his face and keeps up the good fight.

“Kirkland Clinic diagnosed me after running lots of tests back in 2005,” said Beiro. “I was beginning to have signs of what I have now even in my twenties.”

It was at the time of his diagnosis that Beiro began to take working out very seriously, as staying active slows down the progression of the illness. “I’ve been stable. I haven’t needed an IVIG treatment since August of 2013,” Beiro said. “It’s neither bad nor worse.”

Among the activities that Beiro partakes in at the YMCA are yoga, body flow, swimming and weight lifting. Beiro’s favorite activity among these is swimming. However, he has been kept out of the pool due to a nagging wound on his hand and is itching to get back in the water. Body flow is his next favorite and instructor Andy Savage teaches it. The class focuses on yoga, Tai Chi and Pilates.The workout helps individuals build flexibility and strength while at the same time working towards feeling centered and calm. “Play period doesn’t stop when you graduate from high school. You still have to do play period when you are 65” said Beiro.

Beiro has been frequenting this branch of the YMCA since 2000 and lauds its staff and members for their kindness and understanding. “There are some nice folks here. They help me set up and get my materials ready for every class.” It seems like Beiro gets by with a little help from his friends.