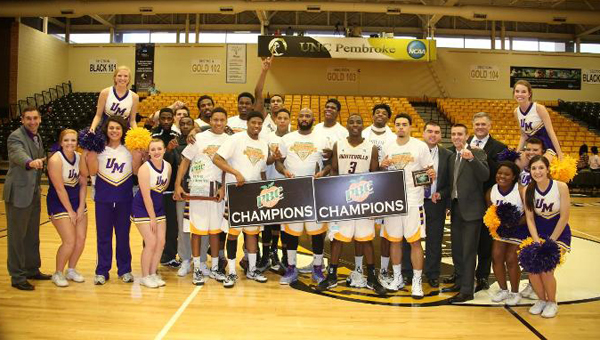 PEMBROKE, N.C. – The University of Montevallo men’s basketball team was down by 21 points at halftime to the Columbus State Cougars in Sunday evening’s Peach Belt Conference Championship Game. In the second half, Coach Danny Young’s team was able to utilize a total team effort to force overtime and eventually complete the improbable comeback. After 45 minutes of basketball, UM hoisted the PBC Championship Trophy after defeating the Cougars, 80-76.

Columbus State was looking to avenge its two regular season losses to the Falcons in the title game and jumped out to a quick start. They sustained the lead throughout the half, and led 41-20 at halftime.

To start the second half, the Cougars scored the first four points and expanded their lead out to 25 points.From that point on, Montevallo dominated the contest, methodically chipping away at the deficit.

Back-to-back three-pointers from Shykeem Jackson and Troran Brown cut the lead to just 15 points with under 15 minutes to play.

Brown picked up his fourth foul midway through the half, so Montevallo was forced to go without the two-time PBC Player of the Year down the stretch. The Falcons continued to thrive without their star, receiving big performances from multiple players.

Ryan May made a three-pointer with 6:47 to play that put the Falcons within single digits, 59-50.

Bryant Orange was pivotal to the Falcon attack as time ticked down. The Chicago native had eight points in the final four minutes, including the game-tying basket with just 21 seconds remaining.

After two CSU free throws and a Montevallo timeout, Brown would get an offensive rebound on the following possession and get fouled on the putback. Despite sitting on the bench for a large portion of the second half, the senior from Phoenix calmly sank two free throws to send the game into overtime.

All told, the Falcons went on a 48-23 run to close out regulation.

In the extra time, the trio of Orange, Brown, and Slaughter put a combined 12 points, out dueling the Cougars and earning the win for Montevallo, 80-76.

Orange finished with 19 points, scoring 17 in the second half and overtime.

Slaughter finished with 18 points and eight rebounds. Combined with his 14 points and 14 rebounds from the semifinals, the senior was named the PBC Tournament MVP.

On what it felt like to win the championship and MVP honors, Slaughter, a second-team all-conference performer, said, “It’s the greatest feeling in the world. I’ve never had this feeling.”

For Montevallo, it’s the second PBC Tournament title in six years in the league. The Falcons have made the championship game five of the six years.

Next up for Montevallo is the Division II NCAA Tournament. The Falcons earned the number 2 seed in the Southeast Region and will face Carson-Newman at Tex Turner Arena in Harrogate, Tenn. on Saturday, March 14.

Montevallo was ranked fourth in the Southeast Region by the NCAA recently. The Falcons are currently playing in the PBC... read more