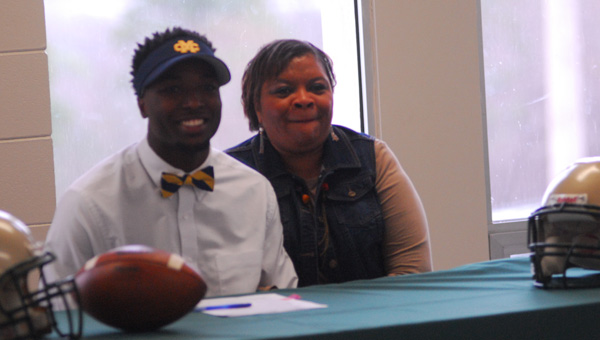 PELHAM – A group gathered in the cafeteria of Pelham High School after school on the afternoon of March 9 to watch one of their own make his college choice. Moregan Sharp, longtime Panther, made his decision to attend college at Mississippi College official after a heartfelt speech to everyone who helped him attain this opportunity.

As Sharp was going down the list of people to thank, he paused in the middle to thank the “number one lady in (his) life, (his) mother.” He also went on to thank a number of his old coaches and teammates on both the football and basketball teams.

Sharp decided to take his talents to Mississippi College on his visit two weeks ago. “I love the campus, it’s a great education,” Sharp said. “It’s kind of far away from home, but I knew that was going to be my new home, where I was going to play college football. And I can play early too.”

As a two-sport athlete at Pelham, Sharp always knew he wanted to play football in college, but wasn’t necessarily sure that was an attainable goal until high school. “I didn’t know it was going to be this serious until my sophomore year, then I thought that it (playing in college) could be real.”

Jacksonville State and Alabama State were the other two schools that Sharp was giving thought to attending to play football, however the combination of the campus, coaching staff and the opportunity to play right away were the integral reasons he picked Mississippi College.

“And the opportunity to get a degree as well,” Sharp made sure to mention.

A well-spoken kid, Sharp will look to arrive at Campus in Clinton this summer and be an offensive contributor at the running back position immediately.