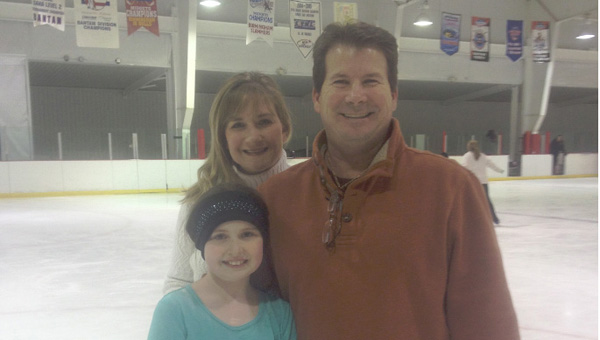 Craig Henderson, left, pictured with a teacher and student, is the director of skating at the Pelham Civic Complex. (Contributed)

PELHAM – As we slip-slide into the final stretch of winter, cold weather sports are still rockin’ and rollin’ at the Pelham Civic Complex and Ice Arena. One particular program that remains quite popular is the skating school, which currently holds 335 students. Craig Henderson, the director of skating at the facility, is the man incharge of running the show.

“The skating school we run here is a United States Figure Skating Association Program,” said Henderson. “And it happens to be the best one in my opinion.”

This program is by no means age discriminatory. According to Henderson, he is currently teaching students as young as two and a half and as old as 72.

Along with overseeing the day-to-day activities, Henderson commingles with his 15-coaches as he also acts as a skate instructor. “I’ve been skating and doing this for forty years,” Henderson said. “I competed all my life and was at the international level. So, when this job came up I applied because I am used to the program.”

The coaches are divided into three divisions. One division is for junior coaches, one division for mid-level staff coaches and one for high level-masters.

The classes are run consecutively year round and typically last eight weeks for a fee of $120. This includes a half-hour group lesson and eight free public session passes, which is basically 16-hours of practice time. You can choose from the following days: Monday, Tuesday, Wednesday or Saturday.

Private lessons are also available for anyone who is interested at the facility. “Every one of my coaches here at the rink offer private lessons,” said Henderson. “Some are part time coaches who teach on the side and others are full time coaches and actually make a living out of this.”

He also went on to say that his coaches consist of competitive figure skaters and competitive hockey players. “You name it, we got it,” he said.

If you are interested in signing up for the Skate School, a spring break camp will be offered from March 30th-April 3rd. Registration is available at the Pelham Civic Complex.

Thompson’s Brady Johnson challenges for a loose ball in their Feb. 28 contest with Gadsden City that resulted in a... read more