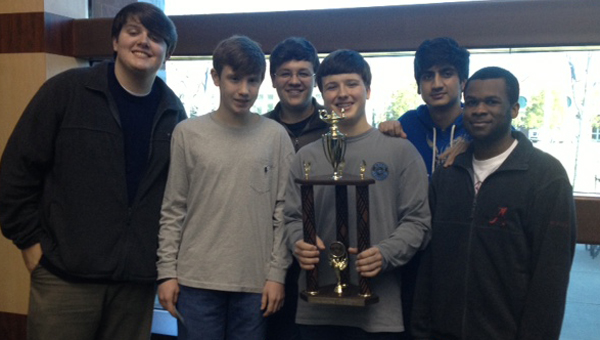 The team of ninth and 10th graders advanced through the 54-team district competition to the state-level tournament, where they defeated Indian Springs, Altamont, Hoover and top seed, Springwood, to secure the state title.

“It was a lot of fun. Our kids worked really hard, I’m proud of them,” coach Todd Parker said, noting the state victory was the first in Spain Park history.

Scholars Bowl is a knowledge-based competition in which teams go head-to-head “answering questions in a jeopardy style format,” Parker explained.

“For the first time this year, Spain Park actually has a class (for Scholars Bowl),” Parker said. “They’re able to study subjects with a depth and breadth of different types of knowledge that they never have before.”

Throughout the year, the class of 15 students practice and prepare for regular invitational tournaments beginning in October and culminating in the state competition in February.

“(For) invitational tournaments during the year, we can take multiple teams,” Parker explained, however the state competition team was made up of the top six performers throughout the year.

In addition to exploring a wide range of subjects, Scholars Bowl is also “a tool to reinforce the values of self discipline and conscientiousness,” Parker explained.

“Those values are the values they’re going to be able to carry with them beyond Spain Park,” Parker said. “Those values will help them be successful.”

“Learning begets more learning,” Parker said. “It’s just something fun to do for the rest of your life. There’s always something to learn.”