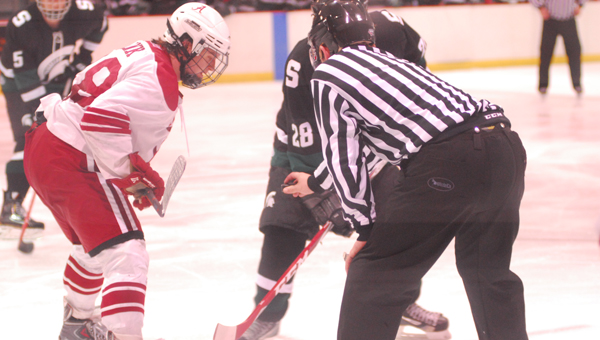 PELHAM – The Alabama Frozen Tide took the ice in the opening round of the ACHA Division III National Championships on March 10 against the Spartans of Michigan State. After the full 60 minutes, the two teams were tied up, and per ACHA Championship rules, went into a 10-minute overtime period before calling the game a tie.

The ACHA, or the American College Hockey Association, is the governing body of non-scholarship hockey, and the city of Pelham plays home to all of Alabama’s home games. Pelham applied more than two years ago to host this tournament, and the ACHA picked Pelham to host this years’ national tournament.

The action in this one started off with a bevy of offensive production. Kenny Janssen broke the scoreless deadlock less than three minutes into the opening period, but Michigan State responded with a goal of their own less than two minutes later to tie the score back at 1-1. The Spartans could not take advantage of an early power play, due in large part to Thomas Condon standing strong between the pipes. With less than seven minutes to go in the period, Andre Morard broke free and beat the Michigan State goalie to take the lead back. However, with less than a minute left in the quarter the Spartans poked one past Condon to end the first period at a 2-2 deadlock.

In the second quarter on an Alabama power play, Condon attempted to clear the puck, but a Spartan stick deflected the outlet pass and pumped another shot past the Alabama goalie. The two teams went into the third period with Michigan State on top 3-2.

A quick Alabama goal in the third period tied the score back up, but Carson Gatt of Michigan State broke free for what seemed to be the game winning goal with about 13 minutes left in the game. Brendon Dickerson brought the Frozen Tide back to even with a goal of his own with under 10 minutes to play. The two teams could not score any more the rest of the way, and the game ended in a deadlock, 4-4.