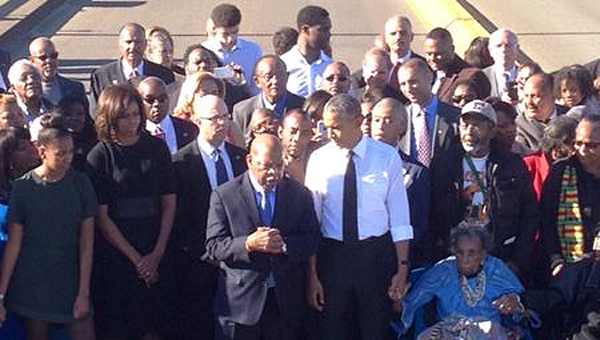 Tammy Taylor Williams had no expectations when she wrote a letter to President Barack Obama, recalling her experience as the first black student at Thompson Elementary School in 1969.

Williams included details about the one girl who befriended her, Kelly Butler, and her teacher, Ms. Gleason, who walked her to class and watched out for her on the playground.

“I wrote it during black history month. I didn’t think of being invited anywhere,” Williams said.

So when someone from the White House called Williams on Monday, March 2, she thought it was a prank from a morning radio show and promptly hung up the phone.

“When they called the first time and said it was the White House, I hung the phone up,” Williams said with a laugh.

It was only when the White House called a second time that Williams learned her letter had earned her a VIP ticket to the 50th anniversary of the “Blood Sunday” march in Selma, along with invitations for Butler and Gleason as well.

“When I found out actually it was real I was so excited, I called everyone I knew,” Williams said.

“It was an experience,” said Williams, recalling she was too nervous to ask for a picture when she met the president.

Williams also marched along with some of the Freedom Fighters, who told her their own stories.

“One guy showed me his head, where he got hit by a stick covered in barbed wire,” Williams said. “It felt really good walking with someone who helped me get the vote.”

What are Alabaster residents’ dreams for the city?

Tom Bunch and his wife, Lanie, write their goals for the city’s future on a poster during a March 10... read more