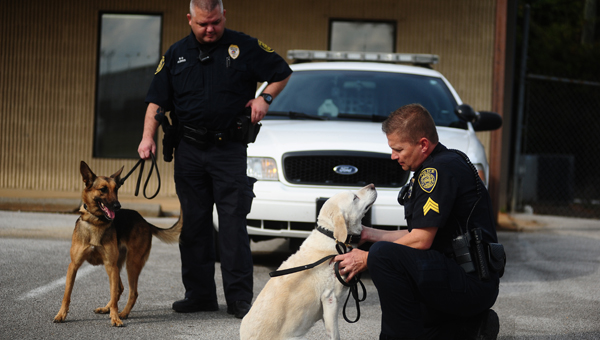 On Sept. 13, 2013, the Pelham Police Department and K-9 unit responded to a drug-related call at the Oak Mountain Lodge on Pelham Parkway. K-9 officer Zenna caught the scent of crystal meth and alerted the police to a room, and then a bathroom in the motel, revealing an operating meth lab.

“(The suspect) took two shake and bake meth pots and dumped them into the toilet,” Pelham Police Department Sgt. Steve Johnson said. When Zenna alerted and her handler opened the bathroom door, the “fumes overwhelmed them.”

The discovery led to the arrest of four individuals, but also sent Zenna, her handler and three other officers to the hospital.

Like any other police officer, K-9s face the possibility of injury in the line of duty. The drugs the dogs are trained to locate can be dangerous as can be the criminals they track.

“They’ll do different things to try and hurt the dog… or kill the dog,” Johnson said, recalling an incident when his K-9 partner Bizzy ingested rat poison placed out by a criminal. “It’s something to be cognizant of.”

At first glance, Bizzy and Zenna look like any happy, well-cared-for and very well behaved dogs, but they are anything but ordinary. They are the two highly trained narcotics dogs that, along with their handlers Johnson and Pelham Police Officer Mike Morris, make up the Pelham Police Department K-9 Unit.

K-9 dogs are selected and trained by specialists from a young age. The Pelham Police Department got yellow lab Bizzy when she was 1-year-old from Auburn University’s K-9 training program. Zenna, a 4-year-old malinois, was trained by expert K-9 trainer Ricky Farley at the Alabama Canine Law Enforcement Officers Training Center in Northport, Ala.

Narcotics dogs are trained to identify and alert to the smell of a range of illicit drugs. The most common drugs Bizzy and Zenna come across are heroin, meth and marijuana, but Johnson said there has also been a rise in synthetic marijuana and a form of Ecstasy called molly.

Bizzy and Zenna are not only able to identify present drugs, but their sensitive noses can also detect if someone has recently used drugs or locate where drugs have been.

Johnson explained that Bizzy once helped seize $314,000 in currency for the DEA by alerting on traces of drugs found on the cash.

“If you want to do hotels or a parking, you can’t beat them,” Johnson said, noting Zenna narrowed a hotel search down to the exact door narcotics were behind.

Bizzy and Zenna report to work each day with their handlers at the Pelham Police and Court building and patrol a beat in a specially-designed K-9 patrol car fitted with a more-than-$4,000 seat insert which includes a built-in water bowl and $1,000 air vent system to keep them cool.

“They stretch their legs and move around a little bit, then they hop in the car and patrol with us,” Johnson said. “They ride around with us for the shift and we deploy them if someone needs us.”

Bizzy and Zenna are often called in to assist other officers, and even outside agencies, in cases where drugs are suspected. These calls range from routine traffic stops and tractor-trailer searches to school locker and hotel searches.

Morris estimated Zenna gets deployed at least three times a week, although this ranges. In August 2014, Morris and Zenna performed searches in 26 separate cases and on Saturday, Oct. 25, Morris said he and Zenna were called in for eight drug searches.

“Three cases wouldn’t have been made without the dogs,” Morris said.

Zenna and Bizzy are especially useful to officers in traffic stops where drugs are suspected, Morris explained. If a dog alerts to drugs in a vehicle, the police are legally allowed to search, even if the suspect does not give consent.

In addition to working a beat, Bizzy and Zenna run training exercises throughout the day in order to keep them sharp, accurate and motivated.

The Pelham Police Department has a training facility at Pelham City Park complete with sedans, a minivan and school lockers, but Johnson and Morris said they like to train “any and everywhere” at a variety of locations.

“We try to move around and throw different environments at them,” Johnson said. “We’ll try to find places they haven’t seen before to keep them on their toes.”

To train, Johnson and Morris hide drugs in various locations, one at a time, the dogs are brought into the location and given the command to search, in English for Bizzy and Dutch for Zenna.

The K-9 and handler then perform a search until the K-9 locates the drugs and gives a final response. Searches are fast-paced, so it is important for the handler to recognize the dog’s alerts.

Johnson explained Bizzy gives her final reponse by sitting or looking back at him. When she does this, she expects to be rewarded with her special toy, a red rubber ball.

When Zenna alerts to the location of narcotics, she freezes, her body tenses and she will not move from the location until Morris throws her toy, a white piece of PVC pipe.

“When she smells odors, she’s not going to come off it,” Johnson said.

Johnson and Morris log every detail of each training session, what drugs were used, how long the drugs were in place before the dogs searched, how long each dog searched and what each dog alerted to.

As the younger of the two dogs, Zenna now bears the brunt of the workload as Bizzy nears retirement. At 9-years-old, Bizzy has actively worked with the Pelham Police Department for eight years.

“She’s about done, we’ll probably work her one more year,” Johnson said of his partner in October 2014. “She’s paid for herself several times over. She’s been a fantastic dog.”

Get muddy at the Mudder for Missions, March 15

The third annual Mudder for Missions run will be March 15 in Wilsonville. (Contributed) By MOLLY DAVIDSON / Staff Writer... read more