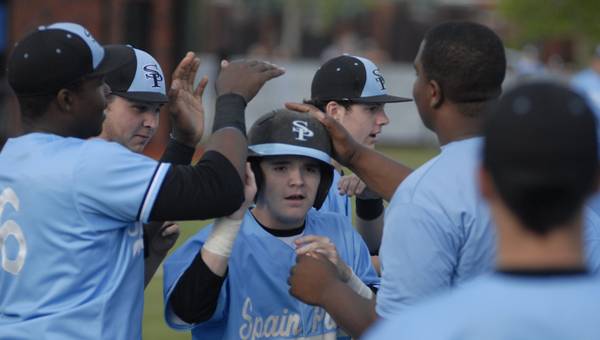 Spain Park dismantled Pinson Valley during a March 9 doubleheader. The Jaguars won both games by a combined score of 15-1. (File)

HOOVER – What started out as a relatively competitive series between Spain Park and Pinson Valley on the baseball diamond on March 9 quickly turned into anything but, as the host Jaguars turned the Indians of Pinson Valley away by a combined score of 15-1 over the two-game stretch.

Hayden Freeman took the mound for Spain Park in the first game of the season and never left. He threw an 81-pitch complete that only saw two hits and one run scored. Freeman also went 2-2 from the plate for the Jaguars on the day to lead the way for Spain Park on both the offensive and defensive fronts.

Scoring started for the Jaguars in the first game in the second when Freeman smacked a leadoff double into center field, and his pinch runner, Wade Streeter subsequently scored when Jackson Boyett singled to right field. Up 1-0 in the third, Spain Park put more distance between themselves and Pinson Valley when Rodney Anderson hit a double into left field to score Bryan Sanderson and Drew Hawker followed up Anderson’s at bat on a ground ball that scored Connor Pendleton. Behind the early flourish of hits and Freeman’s prowess from the mound, the Jaguars won the first game 4-1.

The second game was not nearly as close, as Spain Park used a seven-run third inning to pull away from the pesky Indians and call the game after only four-and-a-half innings by a final score of 11-0. Quentin Hoffman went the abridged distance for the Jaguars, pitching a five inning, two-hit game where he struck out four batters. Anderson went 2-3 from the plate in the second game and went 4-6 from the plate in the two games combined and drove in a total of four runs to lead the way for Spain Park on the day.

Chaz Cary of Chelsea lines up a Shelby County pitch during their March 9 game. Chelsea lost 4-3 on the... read more