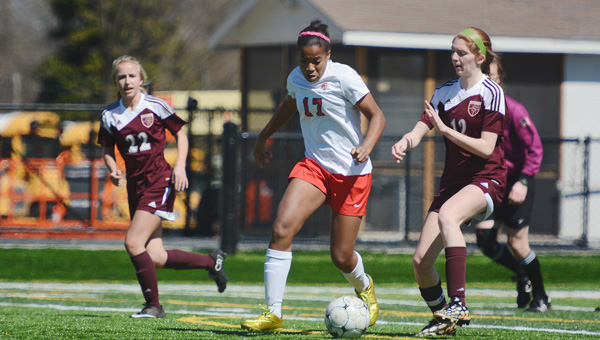 Meghan Jones of Thompson makes a move around two Sparkman defenders on March 7. The Lady Warriors came away victorious by a final score of 2-1. (Contributed)

ALABASTER – The Thompson Warrior soccer programs both picked up wins on March 7 and continued their early season success against good competition in the Senators from Sparkman.

The fourth-ranked Lady Warriors hosted the 10th-ranked Sparkman visitors in an early season showdown of two top-10 teams in the state in class 7A. Senior Brittany Yoder found the back of the net to break the stalemate off of an assist from fellow senior Mariah Poe. Yoder, who has committed to play soccer next season at Troy University, has been a leader in the middle of the field for the duration of her time at Thompson. Meghan Cottingham skirted a ball past the arms of the Sparkman keeper later in the contest on an unassisted strike to give the Lady Warriors the 2-0 victory.

Molly Morris held her own in goal, keeping her net clean on her way to a seven-save shutout.

Following the girls game, the Thompson boys skirted past the Sparkman boys 1-0 in a low-scoring affair. Kenny Rodriguez and Philip Vaccarella helped lead the way for Thompson in the victory. Both the boys and girls programs are off to a good start at Thompson, and they will look to continue their forward momentum as both teams move into district play.

Thompson’s Brady Johnson challenges for a loose ball in their Feb. 28 contest with Gadsden City that resulted in a... read more