What are Alabaster residents’ dreams for the city? 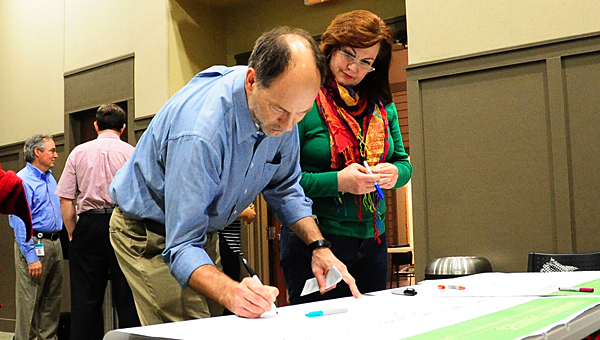 Tom Bunch and his wife, Lanie, write their goals for the city’s future on a poster during a March 10 comprehensive planning meeting at Alabaster City Hall. (Reporter Photo/Neal Wagner)

ALABASTER – About 50 Alabaster residents listed amenities such as more bike lanes, mixed-use commercial buildings and a new library while providing input for the city’s comprehensive planning process on March 10.

The meeting, which was hosted by the Regional Planning Commission of Greater Birmingham at Alabaster City Hall, allowed residents to provide their thoughts on the city’s future in categories such as retail services, community services, housing, education and transportation.

After a brief presentation by the RPC, those in attendance visited several tables to share their dreams for Alabaster’s future.

“I’m interested in seeing the city grow,” said Alabaster resident Tom Bunch. “I would like to see more bike and walking lanes in the city. I think that really builds community.”

The retail services poster was a popular stop, as residents and business owners suggested items such as a Cheddar’s restaurant, a craft store, reduced business fees for startup companies and more technology-related industries.

In the education category, multiple residents suggested attracting a community college campus to the city, more agricultural offerings in Alabaster schools and an expanded shop class.

Alabaster resident Stewart Myers said he would like to see more mixed-use buildings in the city, which would allow commercial developments on the ground level and residential space on upper floors.

“If you work at the hospital, you could walk to work. The shop owners could just walk downstairs,” Myers said, noting he also would like to see more affordable retirement communities in Alabaster.

Brenda Fitzgerald said she suggested a new library during the meeting.

“It services the most people out of any library in the county, but it’s the smallest total square feet,” Fitzgerald said.

Through the comprehensive planning process, Alabaster is looking to update its 2005 master plan. After a series of public meetings over the next few months, the RPC will work with an advisory committee to draft the new master plan.

Those who did not attend the open house can provide input in the “vision survey” included on the Alabasterforward.com website.

The March 10 meeting was the first of several public forums planned in the city’s comprehensive planning process.

A design charrette will be held over multiple days from April 27 through May 1, and will focus on the future of the city’s Medical Mile and the Siluria area.