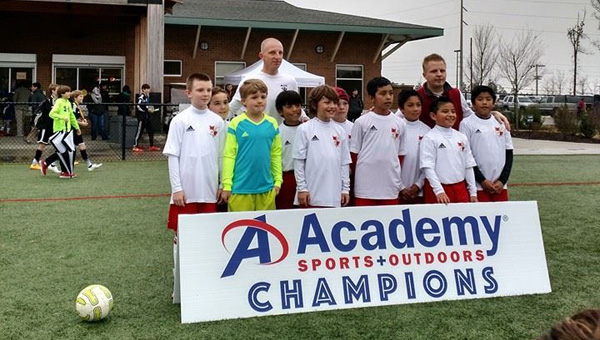 BIRMINGHAM – The Alabaster Competitive Soccer Club’s U11 boys team won the Bronze Division of the Red Diamond Vulcan Cup over the weekend of March 7-8. According to a press release sent out by the Cup, Alabaster SC was one of 261 teams from nine different states to compete in the tournament and is “one of the Southeast’s premier soccer tournaments.”

According to Reddiamondvulcancup.com, Alabaster SC went 4-0 at the tournament on their way to hoisting their divisional trophy. They first dismantled the Tennessee Soccer Club 04 Select South by a score of 10-0 to start the tournament out on a strong note. The club then beat the Chattanooga Football Club 04 Elite 6-3 in what was the first of two eventual matchups between the two squads. Both of the first two games Alabaster SC played were on March 7, and they helped to solidify themselves as the top team in the group.

On March 8, Alabaster SC made short work of the Birmingham United Soccer Association 04 Elite North Blue squad 7-0 before advancing to the championship game late Sunday afternoon. The championship game was a rematch with the Chattanooga FC squad they had beaten earlier in the tournament. The second time around, Alabaster FC scored the fewest amount of goals they had in any game throughout the tournament, but they still were able to knock four goals past the Chattanooga FC keeper to secure the 4-1 win and wrap up the Bronze Division championship with a perfect 4-0 record.

Clay Link, left, of the Alabama Frozen Tide faces off against Thomas Ebbing of Michigan State in their first round... read more