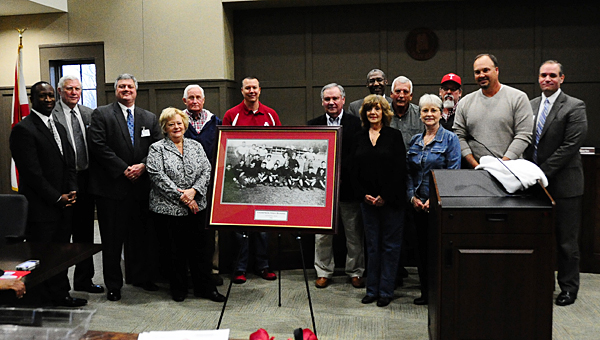 Members of the Bentley and Busby families join Alabaster school leaders as they present a photo of Thompson High School’s first football team to the city school system on March 9. (Reporter Photo/Neal Wagner)

ALABASTER – After seeing the relatively miniscule original copy of Thompson High School’s first football team, Alabaster resident Eddy Bentley was still in awe of how good the photo looked after it was enlarged and framed for presentation to the city’s school board.

“Johnny Busby found it, and he got with (Shelby County Historical Society President) Mr. (Bobby Joe) Seales to get more information,” Bentley said. “We brought it to Bill’s Custom Framing, and he gave us a really good deal to blow the photo up and frame it. It looks great.”

During a May 9 Alabaster Board of Education meeting, Bentley’s son, Jeff, presented the photo depicting the 19 members of the school’s first football team in 1932 to the School Board in an effort to celebrate the school’s history.

“I’m not sure exactly where this was taken. It was some field before the (current THS stadium) was built,” Jeff Bentley said. “As you can see, a couple of them have helmets. Most of them didn’t.”

After Busby discovered the original photo, he contacted Eddy Bentley and Roger Bentley, who lives in Douglasville, Ga., with the idea of presenting the historical item to the city’s school board.

In addition to honoring the city’s first gridiron Warriors, the photo also represents the long lineage the Bentley and Busby families have in the community.

Johnny Busby’s father, Don, is in the photo and scored the school’s first touchdown, Eddy Bentley said. Jeff Bentley’s grandfather, George, and two of his uncles are also included in the photo.

Since 1932, four generations of the Bentley family have graduated from THS, with “a fifth on the way,” said Corky Overton, George Bentley’s grandson.

Jeff Bentley, who played for coach Larry Simmons in the school’s 1982 state championship team, said football has always played a part in bringing the community together.

“I can remember when I played on the team, I remember the community being involved in the whole process,” Jeff Bentley said. “What’s been done in the past plays a big part of what happens in the future.”