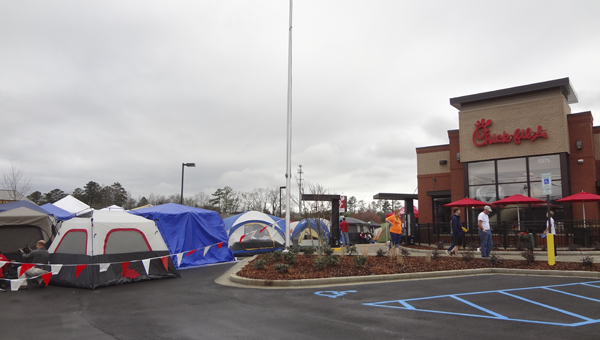 More than 100 people camped out at Chick-fil-A in Greystone on March 11 for the new restaurant’s First 100 celebration leading up to the restaurant’s grand opening March 12. (Reporter Photo/Emily Sparacino)

HOOVER – Marilyn Cooke and her family arrived at the new Chick-fil-A restaurant in Greystone at 3 a.m. March 11, ready to camp out in the parking lot on the eve of the location’s grand opening for a chance to win free Chick-fil-A meals for a year.

“We have always wanted to go camping,” Cooke said, laughing. “We just looked forward to it.”

Cooke, of Huffman, said a family friend introduced them to Chick-fil-A’s “First 100” celebrations, at which people pitch tents and stay outside the restaurant for 24 hours before its grand opening in hopes of winning a digital offer card loaded with 52 free combo meals.

Cooke, her husband and their two daughters were among nearly 170 people that showed up at Greystone’s Chick-fil-A location at or before 6 a.m. March 11 for the First 100 event.

Brent Fielder, owner and operator of the Greystone location, said a drawing was held to narrow the pool down to 100 participants, who had to stay on the Chick-fil-A property until 6 a.m. March 12 to be eligible for a free meal card.

Games were available for campers throughout the day March 11, and Fielder said DJ entertainment and an ice cream party were in the evening activities line-up.

“I think it’s just a lot of excitement,” Fielder said. “It’s a fun way to welcome a new store into the community.”

Marvina Bolton of Philadelphia said she has attended 47 Chick-fil-A First 100 events in 17 states.

Bolton and her 5-year-old son, Semaj, drove from a Chick-fil-A in Branson, Mo., to the Greystone location March 11 for back-to-back First 100 events.

“These serve sort of as a big family reunion,” Bolton said. “I’ve been doing these now three years. My goal is to do 100 in five years.”

“To be transparent, the motivation was the chicken,” Bolton said.

But Bolton, a funeral director, began to view the events as “therapeutic” for her.

“I’m always serving families at a difficult point in their life,” Bolton said. “It brings a sense of balance to my personal and professional life.”

Bolton said she also appreciates the biblical principles on which Chick-fil-A’s late founder, S. Truett Cathy, built the company, and even finds opportunities to minister to people she meets at the First 100 events.

“Attending these First 100 events helps build a great sense of community relations,” Bolton said. “Even in the parking lot camping out for chicken, God can use you.”

Jeff and Sandra Justice of Pell City have experienced seven First 100 events and enjoy the perks of winning a free meal card to cover at least one of their family’s dinners every week for a year.

“We have teenagers who love Chick-fil-A,” Sandra Justice said. “It’s become such a routine for us that we try to make sure we hit at least one (event) a year.”

Jeff Justice said he and his family reconnect with people they have met at past First 100 events.

“You see people you remember, and people remember you,” he said. “It’s an experience.”

The Chick-fil-A in Greystone will open for business at 6 a.m. March 12, and a ribbon cutting ceremony will take place at 10:30 a.m.