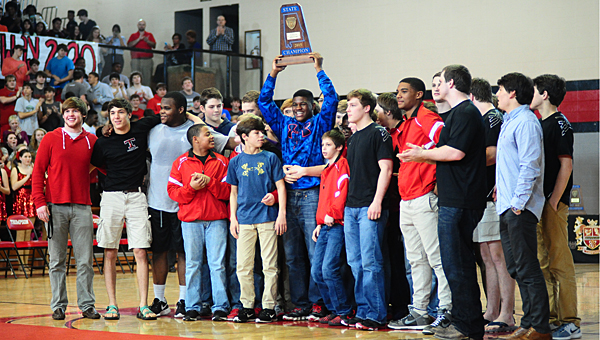 ALABASTER – When Thompson High School Principal Chris Tangle arrived at the high school for his first day of work last summer, he immediately noticed something about the school’s wrestling team.

“They were here at 6 a.m. every morning running the hallways. Not just Monday through Friday, but Saturday and Sunday morning as well,” Tangle said. “It took me by surprise that they were here that early. But the dedication they showed then has paid off today.”

The school’s students erupted into cheers and applause during a pep rally in the THS gymnasium as wrestling team member Nick Mobley hoisted the school’s fifth-straight wrestling state championship trophy over his head.

Although it was the team’s fifth state championship trophy in as many years, the 2015 trophy was the school’s first since making the jump to Class 7A in 2014. The school now sports a new “Wrestling 7A State Champions” banner in the gym with the year 2015 freshly stitched onto it.

During the ceremony, Alabaster School Superintendent Dr. Wayne Vickers praised head wrestling coach Shawn Weltzin for creating a “dynasty” at the school and across the south.

“I don’t know any other way to describe it other than to say ‘Coach Weltzin and the wrestling team, you’ve helped to create a dynasty across this state and the southeast of the nation,” Vickers said. “He is a winner, and I believe the wrestling program is a great example to the state. That example is that hard work, dedication and pride creates champions.”

Before receiving the trophy, the seniors on the team presented Weltzin with a plaque honoring his dedication to the program.

“Young men, thank you for meeting the challenge. Many said it could not be done, and you proved them wrong,” Vickers said. “We will win our sixth championship under coach Weltzin.

“I’m very proud of you guys and what you mean to Thompson High School and to Alabaster City Schools,” Vickers added.