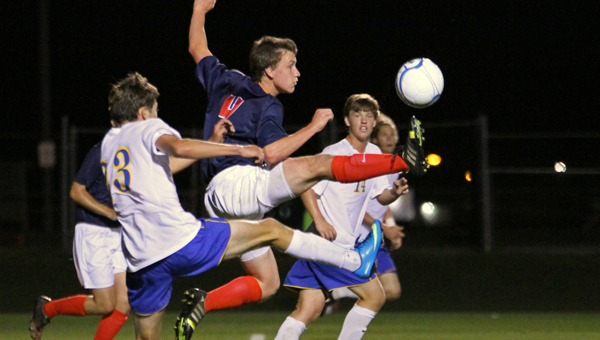 TUSCALOOSA – Both the boys and girls soccer programs for Oak Mountain took a positive step forward on March 9 with wins against area foe Tuscaloosa County. The Lady Eagles were only two games removed from their first loss in over a year when they fell to Vestavia Hills on March 5 by a final of 1-0. They were able to bounce back just two days later when they defeated Bob Jones by a score of 1-0. However the Lady Eagles were still without a satisfying, statement win in the wake of their first loss in over a year, and the first loss of first year head coach David DiPiazza’s reign. That changed on March 9, as Oak Mountain was able to pummel Tuscaloosa County 11-0.

Sara Scherer scored the first goal for the Lady Eagles within the first minute of the game, and the game was essentially over from there on out. Alexandra Dunn scored a hat trick in less than three minutes in the first half, Oak Mountain’s keeper, Katy Denny, was subbed to center forward where she knocked home two goals as well as the Lady Eagles made short work of the Lady Wildcats on their road trip as the game was called early because of the score.

The boys team did not have the offensive success their female counterparts experienced, but were still able to control possession for the majority of the game as they were able to win their contest by a final of 3-0. The boys, fresh off a 4-2 loss to Bob Jones, were looking to rebound and get their early season back on track under second-year head coach Daniel DeMasters. The opportunities were plentiful for Oak Mountain in the first half, but the score remained tied 0-0 before Hunter Ratliff put his head on the ball and knocked a ball past the Tuscaloosa County goalie via an assist from Nathan Heim.

In a rain-soaked second half, Heim would add a goal of his own as would Trigg Langner to give the Eagles the 3-0 win.