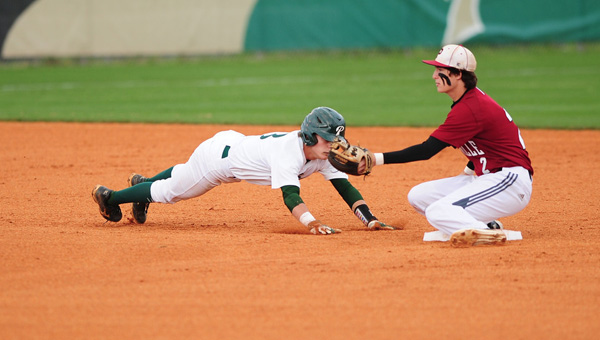 Pelham blitzed John Carroll Catholic on March 9 by a score of 6-1. (File)

BIRMINGHAM – During a dreary March 9 contest between Pelham and John Carroll Catholic on the baseball diamond, Pelham turned to their ace to get them a win on the road. Sam Finnerty never left his perch on the mound throughout the contest, going the whole seven innings, only giving up six hits on 79 pitches and striking out 10. This was the fourth game of the year Finnerty, an Alabama commit for next season, has pitched in this season and the first time he has struck out double-digit batters.

The Panthers advanced to 10-3 on the year and 1-0 in Area 8 play on the efforts of Finnerty and the likes of Hunter Orr, who went 2-3 from the plate with a pair of doubles and an RBI. Finnerty however drove in the run to break the scoreless stalemate in the top of the third inning when he drove a single to center field, which scored Paul Christian Benton from third base. The Panthers would take a 3-0 lead into the fifth inning where they would proceed to put a little more distance between themselves and John Carroll.

After Benton reached base on an error by the John Carroll third baseman, he was able to steal second to put himself in position to score when Orr hit his second double of the day. Finnerty was the next batter and drew a base when he took an inside pitch to the body. Justin Anderson followed Finnerty and hit a sacrifice fly that was again mishandled by the third baseman for the Cavaliers, which allowed Orr to score, Finnerty to advance to third and Anderson to make it to second cleanly. Finnerty was able to walk home three batters later when Logan Brashier hit a sacrifice fly in order to score the run. All told, the Panthers had scored all six of their runs in the first five innings, and Finnerty was able to close the game out from the mound to give Pelham the 6-1 victory.

The Alabaster Competitive Soccer Club U11 boys team, shown here after their victory in the Vestavia Invitational Tournament, won the... read more