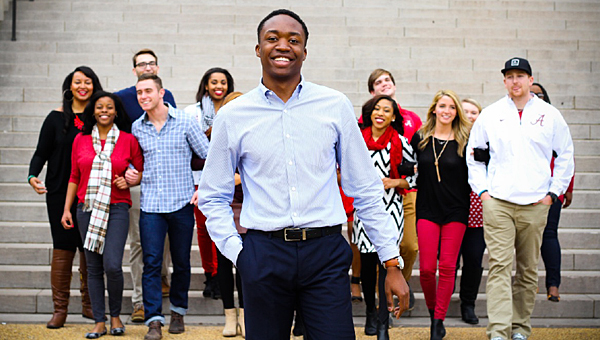 TUSCALOOSA – Elliot Spillers’ mother, Wanda, still remembers the dream her son had after he was accepted to the University of Alabama a few years ago.

“He said ‘Mom, I want to make a difference,’” Wanda Spillers said during a March 11 phone interview. “So I said ‘OK, go earn your degree and make a difference.’ But he had bigger things in mind.”

On the morning after his historic victory at the polls, Spillers said he wasn’t wasting any time in seeking to impact everyone on campus.

“I think when (Alabama Secretary of State) John Merrill called me last night, that’s when it hit me,” Spillers said. “I’m very much a proactive person. As soon as we won, I started thinking about what I need to do to get my team in place and start making a difference.”

Wanda Spiller credited Elliot’s “passion for people” and desire to help everyone he meets with helping him to secure the victory. Although the UA junior lost the SGA election last year, he did not let it get him down, his mother said.

“This was not his first attempt at this. After he lost, he was determined. He didn’t miss a beat,” Wanda Spillers said. “He knew this was something that was meant for him. We give credit to the Lord.”

The newly elected SGA president also credited his faith with helping to secure the victory.

“I’ve told a lot of people this: God told me this would happen,” Spillers said, noting he is a member of the Church of the Highlands in Tuscaloosa. “I have a strong faith, and that was a guiding factor in this.”

Now, Spillers said he plans to work toward his goal of unifying the UA campus and promoting wellness among students – particularly in the areas of mental health and dealing with sexual assault.

Spillers said he plans to work with campus leaders such as resident administrators to identify and help students facing mental illness, and plans to create a peer-to-peer advocacy program to help victims of sexual assault.

“All eyes are going to be on us now,” Spillers said. “We want to deliver, and deliver 10 fold.”

Clay Link, left, of the Alabama Frozen Tide faces off against Thomas Ebbing of Michigan State in their first round... read more