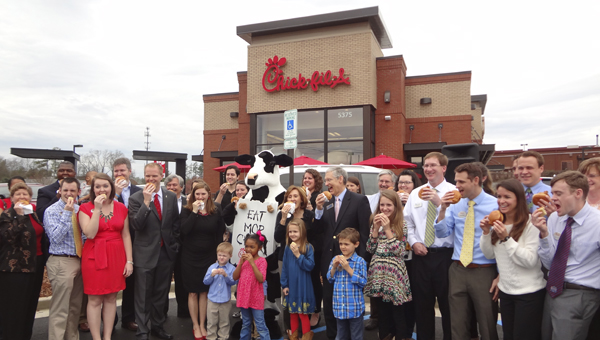 HOOVER – Nearly 100 people stood in the parking lot of the new Chick-fil-A in Greystone on March 12 for a ribbon cutting ceremony as dozens of customers filed into the restaurant and drive-through on the location’s first day of business.

“We are so glad to be here and be in this community,” Greystone Chick-fil-A owner and operator Brent Fielder said. “We do love this city. We’re really excited to be here.”

On March 11, the Greystone Chick-fil-A hosted a “First 100” event, at which people camped in the restaurant’s parking lot for 24 hours for a chance to win 52 free Chick-fil-A meals, one per week for a year.

First 100 winners were announced when the restaurant officially opened for business at 6 a.m. March 11.

Fielder said Chick-fil-A president and CEO Dan Cathy joined the First 100 festivities and ushered customers in as the doors opened the morning of March 12.

“He camped out in the drive-through last night with all the guests and welcomed them in this morning,” Fielder said. “Everything’s been great.”

In keeping with Chick-fil-A’s partnerships with groups that contribute to education, literacy and youth, the Greystone restaurant was collecting new children’s books March 11 and 12 to benefit Restoration Academy.

The OHOH Race to End Childhood Cancer 5K will be held Saturday, April 4, beginning at 8 a.m. at HHS.... read more