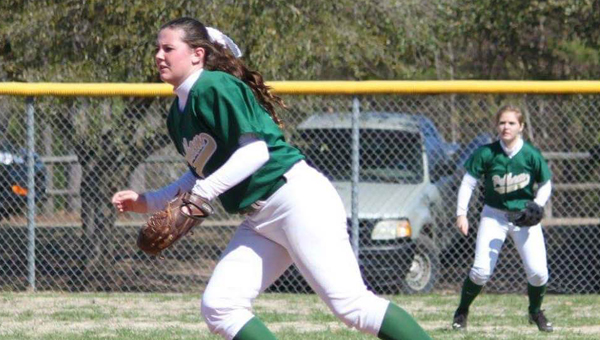 Dalton Merrill and the Pelham Lady Panthers hung on for a 2-1 victory over Pinson Valley on March 9. (Contributed)

PELHAM – On March 9, the Pelham Lady Panthers faced off against the Pinson Valley Lady Indians in what would turn out to be a low-scoring affair that Pelham was able to come out on top of, 2-1. Both teams only used one pitcher for the duration of the game, Cadence Crocker for Pelham and Lauren Keplinger for Pinson Valley, and both pitched well. Crocker went seven innings, threw 102 pitches and gave up five hits and one run. The Lady Panthers needed her to be at her best on this night, because Keplinger had the Pelham bats all but silenced for most of the contest.

All of the runs were scored in the first two innings of the game. Pelham scored first in the bottom of the first inning after Sawyer Martin, the leadoff hitter, got on base when she smacked a single into left. She was subsequently brought home two batters later when Dalton Merrill reached base on an error by the shortstop and Martin was able to make it home unscathed. However, Pinson Valley matched Pelham’s lone run in the first inning with a run of their own in the second to tie the game again at 1-1.

With two outs in the bottom of the second inning, Steeley Martin (17) took the first pitch she saw and sailed a triple into right field to set up the go-ahead run when, one batter later, Gracie Nolen singled to right field to bring her home, and Pelham took a 2-1 lead they would hang on to for the duration of the game.

The hits were evenly spread out for Pelham, with Sawyer Martin, Steeley Martin, Nolen, Hannah Pritchett and Maddie Walker all recording one hit apiece in the win. The Lady Panthers advanced to 3-2 with the win.

Kingwood Christian School fell to Bessemer on March 7 by a final of 10-0. (File) By BAKER ELLIS / Sports... read more