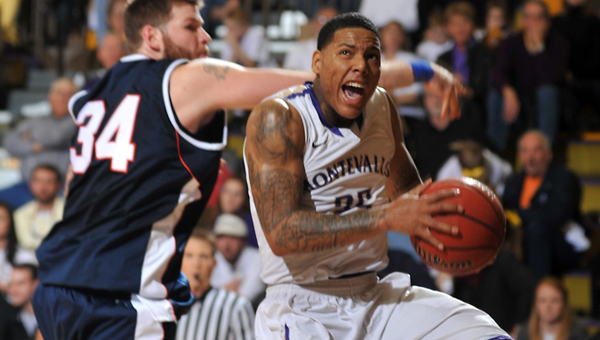 Troran Brown of the University of Montevallo was named the Peach Belt Conference Player of the Year for the second year in a row and has the Falcons primed to make a run in the NCAA Div. II National Tournament. (Contributed)

MONTEVALLO – In the 2002-03 season, the University of Montevallo men’s basketball team won a whopping four games. Total. That summer, the University appointed Danny Young to take over the reeling program. In his first year at the helm, Young won 23 games with his inaugural Falcons squad, posting 19 more wins than the previous year. Since then, Young has turned Montevallo into a consistent Division II contender, appearing in the NCAA Division II Tournament in every year he has coached the program except for two. On March 6 he was named the Peach Belt Conference Coach of the Year for this season.

His Falcons squad sits at number 23 in the country with a 24-8 record. They won the Peach Belt Conference Tournament in thrilling fashion, coming back from 25 points down in the second half of the championship game to beat Columbus State and claim their bid to the Tournament.

“I don’t know if I’ve ever been down that much,” Young said during a March 11 interview. “And then to come back in a championship game like that, it was just a miraculous game.” Young also wasn’t sure, but believes that game has to set the record for largest comeback in the championship game of the Peach Belt’s history.

Young believes his teams have been able to have success because of the consistency he brings to each team. “I just don’t think I change very much,” he said. “I’ve been doing the same things forever, and I like it and it works. Most of the guys like it and have had success playing in it.”

On top of the level-headedness and consistency Young brings to his clubs, one of the reasons this particular team has been so successful is because of two-time Peach Belt Player of the Year Troran Brown.

“That’s (winning Player of the Year twice) only happened three times in the history of the Peach Belt,” Young said. “He’ll definitely have a career playing basketball.”

Brown himself said he was surprised he won the award for a second time, but was honored to be recognized again. “I thought there were a couple of good guards in the Peach Belt,” Brown said. “I thought it was going to be a little tough running for it, so I’m happy for it.”

Brown has averaged 19.7 points and 5.8 assists per game and shot an incredible 48 percent from the floor. As far as his future options are concerned, he would love to pursue a professional career, but first things first, he says.

“We’re focused on the Sweet Sixteen and trying to move on from there,” he said with a smile.

The Falcons play on Saturday, March 14 against Carson-Newman at 2:30 p.m. in Harrogate, Tenn.