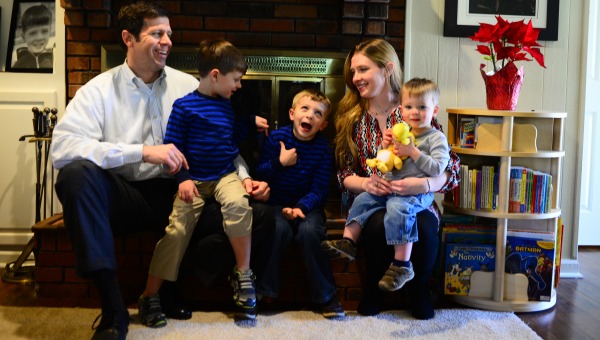 The Chatterton family remodeled the home to fit their growing family.

A home can be a comforting place to spend time with family and create memories. As people get older, however, they normally have to leave where they grew up behind – but not for one local resident.

Anna King Chatterton grew up in Hoover. After college, marriage and a few years out of state, Anna and her husband, Marcus, decided to move back to Alabama.

Their first home after moving back was in McCalla where Marcus, a Captain in the Marine Corps, continued law school. After three years in McCalla, the couple started looking at the possibility of moving to Hoover.

Ironically, the couple found a great home only 12 doors down from Anna’s childhood home. Anna, Marcus and their first child, Ian, moved in 2009.

“We knew we wanted to move back to Hoover, specifically Bluff Park, to raise our family,” Anna says. “Because Marcus’s family moved frequently while he was growing up, we wanted our family to have the stability that I enjoyed growing up in Hoover.”

The Chattertons enjoy their Bluff Park home and the many conveniences the community offers. “We are walking distance from Moss Rock Preserve, which we visit as much as we can,” Anna says. The family grew with two more precious additions: Owen, 5 years old, and Ethan, 19 months old.

“We love our home, but with three small children, outgrowing this home was inevitable,” Anna says. “We weren’t sure if we were going to add on or move but then a different opportunity presented itself.”

That opportunity came in the form of Anna’s parents deciding they wanted to downsize. “They offered us their house, and although we weren’t quite ready to move, it was a great offer, and the house offered enough growing room for all of us,” Anna says.

Moving your family into your childhood home may seem like a difficult task both emotionally and physically, but the Chattertons found a way to turn Anna’s childhood home into the family home she and her husband plan to raise their family and grow together in.

There were no issues with the “bones” of the house, but the 39-year-old house needed updates and a minor reconfiguration to modernize it. “I had some ideas in my head of what I wanted, especially moving the staircase that went down to the basement and doing a complete overhaul of the kitchen,” Anna says.

Other updates include adding a second garage door, redesigning the fireplace area and turning a downstairs garage area into a game room. The Chattertons worked with a contractor to make their vision a reality. The couple also worked with registered interior designer Lori Green to design and lay out a new modern kitchen.

Marcus looked forward to having a more functional kitchen, and the current layout did not lend itself to the amount of cooking he loves to do.

“We knew we were going to do a total overhaul of the kitchen and completely gut it and start fresh,” Anna says. “Cooking is one of his favorite hobbies.”

The old kitchen was “functional” for basic cooking, but Marcus knew he wanted more countertop space, storage space, a much larger gas range and a prep sink along with double ovens. Green was able to design the kitchen to incorporate all of Marcus’s ideas. The kitchen is now open to the family room and allows for more flowing lines.

“We love it, and Marcus loves to cook in it,” Anna says.

Another favorite area in their new home is an enclosed space that, at one time, might have been a main-level garage. But the Chattertons made it into a game room. They did not change much with this space except for the access door.

“It is a great place for the kids to play and have their friends over,” Anna says. “We added a door through our dining room, plus a stair landing area. Now there is access from inside the main portion of the house. That’s been one of the most useful things we did.”

To the left of the fireplace in the family room was a space to store firewood. The space also had a hearth and the whole thing took up an entire wall.

“Firewood storage and hearth was somewhat inefficient space for us, so we decided to knock that part out and make it a built-in bookshelf with a cabinet underneath,” Anna says. The space is now optimized for storage.

The Chattertons say they are thankful to Anna’s parents who made it possible for them to be able to move into the house and for such a wonderful contractor and designer.

The total construction process took six months, but to the Chattertons, it was all worth it.

“We hope to live in this house for many, many more years. We love the finished product, and everyone who knew what the house looked like when I lived here as a kid can’t believe what it looks like now, ” Anna says. “It is nice to live in the home I grew up in, but it is also wonderful to have been able to make enough changes to make it ours.”

[This article originally ran in the March issue of Hoover’s Magazine. Pick up your free copy at one of these locations.] 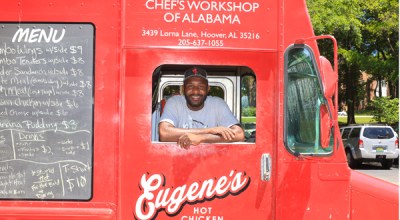