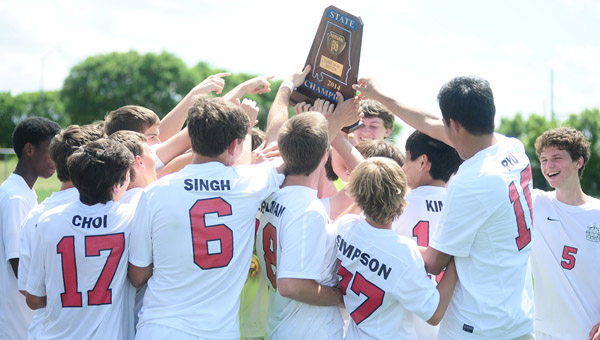 The Indian Springs School’s boys soccer team won the 2014 AHSAA 1-4A State Championship and is looking to repeat the feat again this season. (File)

INDIAN SPRINGS – Tucked halfway between Pelham and Hoover is the village of Indian Springs. In this village there is a school. At this school there are approximately 250 students between grades eight and 12, and they average about 50 kids per graduating class. By every marker the school is small, and is often glossed over when discussions about sports in Shelby County arise, whether merited or not. In the springtime however, Indian Springs has continually planted itself firmly in the discussion for top boys’ soccer program in the county.

Rik Tozzi is in his thirteenth year manning the helm for Indian Springs, and the school has been to nine Final Four’s during his tenure. Indian Springs, or “Springs” as Tozzi refers to the school, is coming off a 27-2 season that saw them claim the 1-4A state title. As of March 13 the program was 7-1-2 in the 2015 season and is looking to repeat as state champions.

Tozzi is a D.C native who moved to England in his senior year of high school to play soccer. He attended Oxford University and captained the soccer team for the school before coming back to the states. He is now a lawyer in Birmingham and coaches at Springs because he believes passionately in the school’s athletic and academic success.

“I’d put my kids against any kids in the state, and not just on the field,” Tozzi said during a March 12 phone interview. “I’ve got great kids playing for me. They’re extended family for me. I can’t imagine not being involved (with the school).”

It’s a unique environment at Indian Springs, according to Tozzi. He has a program that, from a team management standpoint, is better off with more seniors than juniors. “We haven’t had one practice this year with our starting 11,” said Tozzi. “Because seniors go on recruiting trips. I want them to do that. They’re doing what they should be doing and I totally support that. From a team management standpoint it just helps to have more juniors than seniors.”

The caliber of kids is matched by the administrative and parental support the program receives, and is what has led in part to the program’s consistent success, according to Tozzi. “We have absolutely unbelievable parental and administrative support,” Tozzi said. “When we played in Mobile, our headmaster was there to see us play.”

Springs is a 2A school that consistently plays 6 and 7A competition. “Our only two losses last year were against 7A schools,” Tozzi said. The success the program has had is in part a learned skill, according to Tozzi.

With the learned habit of excellence that Tozzi has bred into the culture, the team fully expects to compete for a state championship again this season.

Stephan Poplin unloads on a ball in the first inning to drive in a run during the second game of... read more