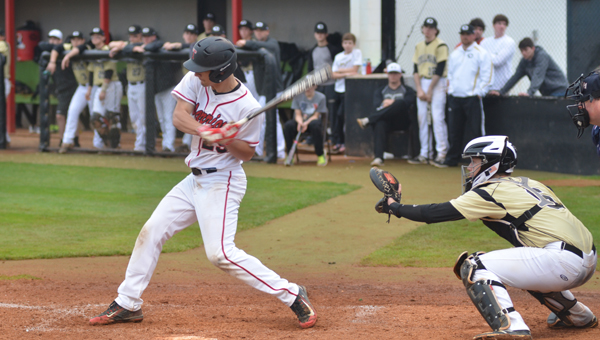 Stephan Poplin unloads on a ball in the first inning to drive in a run during the second game of Thompson’s doubleheader on March 12. (Reporter Photo / Baker Ellis)

ALABASTER – The top-ranked team in class 6A, Cullman, paid a visit to the Thompson baseball Warriors on March 12 to take part in a doubleheader that saw Thompson come away victorious in both contests.

Stephan Poplin took the mound for Thompson to start the first contest and pitched five solid innings for the Warriors before Lance Johnson came in and hurled two scoreless innings to close the game. Thompson scored one run in the bottom of the first inning that proved to be the difference in the game. The leadoff hitter, Riley Reach, took the third pitch he saw and knocked it to left field for a single. Next, Johnson laid the first pitch he saw down the third base line for a perfectly placed bunt that left both Reach and Johnson safe at first and second. After both subsequently stole base, Heath Haskins hit a sacrifice fly to score Reach and give Thompson the 1-0 lead.

The Warriors took their sliver of a lead into the fifth inning, when top-ranked Cullman showed its prowess from the plate. Poplin gave up doubles to the first three batters of the fifth, and Cullman scored four runs in the inning. Of the seven hits Poplin gave up in his five innings of work, five came in the fifth.

Down 4-1 with the momentum seemingly against them, the Warriors responded in their half of the fifth. After drawing two walks to start the inning, Johnson came to the plate two batters later and tattooed the third pitch he saw for a double that scored both Colin Lillie and Zach Brammer. Two more runs crossed the plate in the inning to match Cullman’s four runs scored previously in the inning. With the score tipped back in Thompson’s favor, Johnson took the mound and calmly pitched two shutout innings to give the Warriors the win.