THS senior signs to play at next level 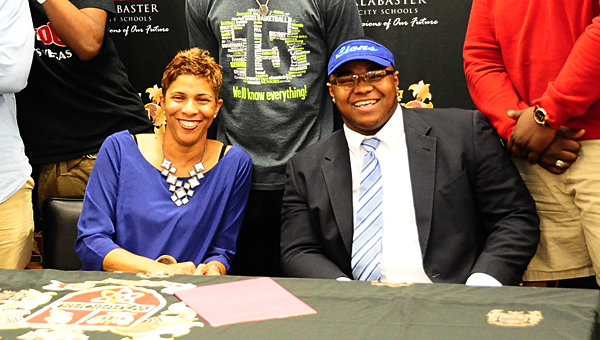 ALABASTER – Although he has suited up in a black, white and red football uniform for the past few years, Marcus Lewis’ presence at Thompson High School has been felt in other sports as well.

“Who leads the cheers in the student section at the basketball games?” THS Principal Chris Tangle asked the about 50 students gathered in the school’s library on March 13.

“Marcus!” the students responded in unison, drawing a smile from Lewis as he prepared to ink a scholarship to play football at the next level.

Lewis was surrounded by coaches, classmates, teammates and family members as he signed to play at the Atlanta-based Georgia Prep Sports Academy.

According to the school’s website, Georgia Prep serves as a link between high school graduation and a four-year college.

“The Georgia Prep Sports Academy is a rigorous post-graduate academic-athletic program for students who wish to continue their desire to earn a four-year scholarship at an accredited four year college,” read the school’s website.

Lewis said he chose Georgia Prep because it will help him further develop his skills as he seeks to follow his friend and longtime teammate Melvin Owens, who signed to play with Mississippi Valley State University in February.

“My ultimate goal is to play at Mississippi Valley State with Melvin,” Lewis said. “Today feels good. I’ve been working on this for a long time.”

Lewis’ mother, Katrina, said she was “very excited” to see her son move on to the next level, but said the prospect of his graduation was somewhat bittersweet.

“I’m very proud of him,” Katrina Lewis said. “It’s like my baby is leaving home, but I know everything will be fine.”

The THS senior said he is looking forward to sharpening his gridiron prowess in hopes of one day suiting up for the Delta Devils.

“I want to thank God for the opportunity to play at the next level, and my beautiful mom for always being there for me,” Lewis said. “I can’t wait to show everyone what I can do.”

Stephan Poplin unloads on a ball in the first inning to drive in a run during the second game of... read more