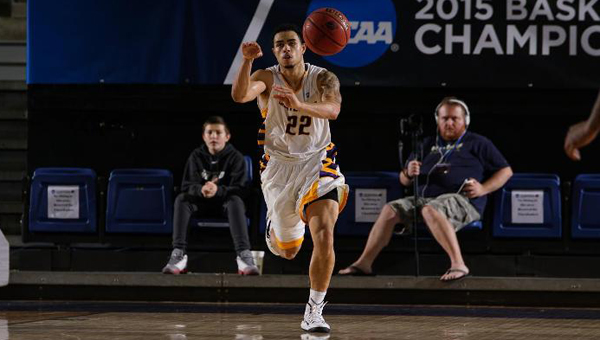 Ryan May passes up court during the Falcons 78-59 NCAA Tournament win on March 15. With the win, Montevallo advanced to the Sweet Sixteen for the eighth time in program history. (Contributed)

HARROGATE, Tenn. – For the second straight season, and the eighth time in program history, the University of Montevallo men’s basketball team advanced to the Sweet Sixteen of the NCAA Tournament on Sunday evening, defeating the UNC Pembroke Braves, 78-59.

To open up the game, the Falcons went on an 8-0 run, highlighted by a pair of three-pointers from seniors Ryan May and Troran Brown.

After halftime, the Falcons dominated the game, pulling away from the No. 16 Braves. Montevallo shot 80% from beyond arc and 60% from the floor, outscoring UNC Pembroke 48-29 after halftime.

On the flip side, the Braves were held to just 30.8% shooting from the field and went 1-for-16 from three-point range. Montevallo held Peach Belt Conference First Team performer Quamain Rose to four points.

Montevallo has outscored opponents by a combined 31 points in the second half through two rounds of the NCAA Tournament.

On the second half success of his team in the game, head coach Danny Young said, “Our defense and our willingness to execute what we talked about at halftime led to open shots.”

May stayed hot throughout the half and finished with a career-high 25 points. The senior was a remarkable 9-for-10 from the floor and made all four of his three-point shots.

Despite some recent struggles, May said that he never doubted his abilities, saying after the game, “I’m a shooter.”

Brown finished with 15 points and a team-high five assists.

Ibrahim Johnson had nine points, all of which came in the second half. The junior from Harlem, New York shot 80% from the floor and had six rebounds.

Fields had a career-high 10 rebounds to go along with four points. Larry Slaughter, the MVP of the Peach Belt Conference Tournament, had seven points and six rebounds.

Shykeem Jackson had eight points on the night, including a pair of three-pointers.

Bryant Orange played a pivotal role for the Falcons off the bench, making 10 of his 12 shots at the free throw line.

For Danny Young, it is the 10th time that he has advanced to the Sweet Sixteen, and he will be looking to advance to the Elite Eight for the fourth time in his career.

Troran Brown of the University of Montevallo was named the Peach Belt Conference Player of the Year for the second... read more