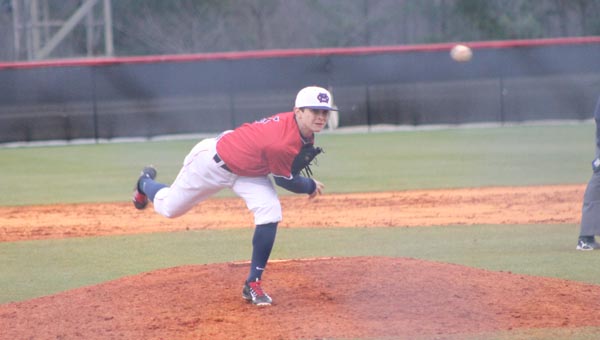 Logan Gibbs, Chris Lamb and Graham Hackbarth all took their turn on the mound for the Oak Mountain baseball Eagles during their marathon game with Enterprise on March 14. Gibbs lasted 1.2 innings and gave up three runs on four hits before Lamb took over. Lamb pitched five innings of work, averaging just over 21 pitches per inning on his way to a 106-pitch day before Hackbarth took over the extra-inning pitching duty.

With the Eagles leading 6-3 going into the bottom of the seventh inning, Lamb was undoubtedly feeling the effects of his workhorse performance and gave up three runs to the Wildcats to force extra innings.

After a scoreless eighth inning, the Eagles opened the game up in the top half of the ninth with some timely batting. Mason Williamson, Joseph Hartsfield and Joseph McCormick all reached base safely through a myriad of ways to load the bases before Hackbarth came through with a clutch single which scored two runs. Those runs proved to be the difference, as Hackbarth burned through the first three batters in the bottom of the ninth to seal the win.

On the second game of the Saturday afternoon, the Eagles took on Florence High School. Blake Schilleci pitched six innings for the Eagles, striking out five and giving up three runs before Gene Hurst pitched one inning of relief work to preserve a 7-3 victory.

In the second game, Oak Mountain did the majority of their damage from the plate in the third inning, knocking six runs across the plate and galloping out to a 7-0 lead early. Schilleci was zoned in and made sure the Falcons never sniffed the lead once Oak Mountain had put the distance between themselves and Florence on the scoreboard.

Hartsfield led the way for the Eagles from the plate in the second game, going 2-3 with a double and an RBI. Coleman Autry, Ethan Holsembeck, Brandon Whitaker, Chase Stiffler, John McDonald, Hackbarth, McCormick and Garrett DeAraujo all tallied one hit in the contest for the well-balanced Eagles offense.

Oak Mountain moved to 6-6 on the year with the two wins.

Spain Park won the 2014 6A baseball state championship and is looking to carry that momentum into this season. (File)... read more