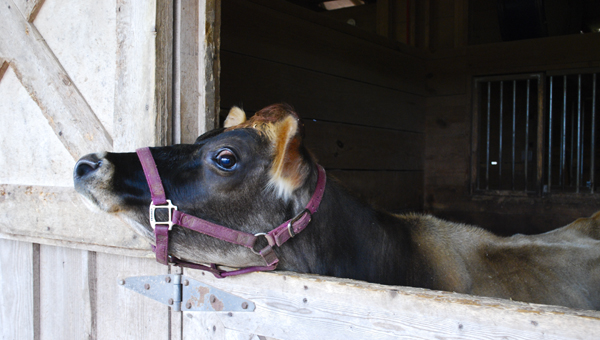 Poppy is one of two cows at Stone Hollow Farmstead in Harpersville that supplies the milk used to make caramel for caramel popsicles sold at Steel City Pops. (Reporter Photo/Emily Sparacino)

Poppy and Bessy are dairy cows whose milk is used to make gourmet caramel pops sold seasonally at Steel City Pops locations in Greystone, Homewood, The Summit in Birmingham, the Pantry by Stone Hollow Farmstead in Crestline Village, Tuscaloosa, Dallas, Houston and new locations coming soon to Auburn and Huntsville.

“We milk Poppy and Bessy for three days and then cook all of the milk into caramel,” Stone Hollow Farmstead owner Deborah Stone said. “It takes eight hours to cook 5 gallons into caramel. Five gallons of milk makes 2 1/2 gallons of caramel.

“We cook 32 gallons at the same time. Eight hours later we have 15 gallons of caramel. We generally deliver 30 gallons at a time. Sometimes more.”

Stone said Poppy, a 3-year-old jersey cow, was purchased from a large dairy more than a year ago.

“Now she gets lots of love being one of only two,” Stone said of Poppy. “Jim named her. We thought it appropriate that he name her since her milk was dedicated to SCP. We purchased her and her friend to make the caramel for Steel City Pops.”

Bessy the cow is 10 years old.

In addition to supplying milk for the caramel pops, Poppy has helped students learn about the role farms play in the foods they eat.

“I did a nutrition class for the first graders and wanted to make a connection between me being there and the farm,” Garrett said. “After showing the video, we used yogurt made from Poppy’s milk to make ‘rainbow smoothies’ using all colors of fruit and vegetables.”

Garrett goes into schools to do nutrition lessons with students, schedules educational programs at the farm and works from the farm’s cafe and market in Crestline, called The Pantry, as a nutritional consultant to customers.

“We want to serve as a source of information and products that help our community create a healthier, cleaner lifestyle,” Garrett said.

Garrett talks with students about the importance of eating all of the colors of the rainbow and makes rainbow smoothies with them.

“We had several parents call or come by and say that their child had been asking them to make the rainbow smoothie and that they were glad to finally have them asking for something good for them,” Garrett said. “The kids loved seeing the video of the farm and seeing Poppy.”

Garrett said elementary students are supposed to get nutrition education during the school year, but many teachers run out of time to cover it because they are focusing on STEM (science, technology, engineering and math) lessons.

“Nothing gets their attention better than making a smoothie using colorful fruits and vegetables,” she said of the students. “They thought it was especially cool that I used yogurt made from Poppy’s milk. This is a great way for me to discuss the importance of local and fresh food with them.”