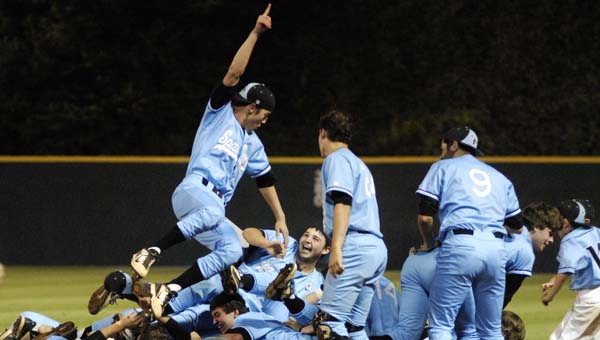 Spain Park won the 2014 6A baseball state championship and is looking to carry that momentum into this season. (File)

Last year, the Spain Park baseball Jaguars were a team touched by destiny in the waning weeks of the season. They limped into the playoffs before catching fire and riding a monsoon of momentum on their way to capturing the 6A state championship, beating the No. 1 and No. 2 ranked teams in the state in the process. After losing 12 seniors from that Cinderella roster, head coach Will Smith is in the process of helping his current squad find their identity.

“It’s kind of odd having to replace so many starters,” Smith said in a March 16 phone interview. “We returned our catcher and one of our starting pitchers.”

What Smith believes is important for this team, and any Spain Park team moving forward, is not to rest on the laurels of past teams, but to make strides to continue to improve.

“After several runs to the quarter finals, the semi finals, the quarter finals and then winning it all, we want to keep the momentum going,” Smith said. “Kids in elementary school see the high school team play and see them be successful. When it’s their turn they know they can be successful too. Last year’s championship is a credit to the kids and teams that came before those kids.”

This year’s Spain Park team currently is 9-6 and is ranked seventh in 7A by the ASWA. For Spain Park to continue their past success, they will have to survive in the toughest area in 7A. The other three teams in the area are Hewitt-Trussville, Mountain Brook and Vestavia. Hewitt-Trussville and Mountain Brook are ranked No. 1 and three in the state, respectively while Vestavia was only one team removed from making the top 10 in the first ASWA rankings.

“That’s the kind of baseball our kids are accustomed to,” Smith said.

Leading the way for this Jaguar club is Mason Duke. The senior ace helped lead Spain Park to their improbable state championship a year ago and has signed to take his talents to Shelton State next season.

“I know we can play every day and every week to get better,” Smith said. He believes his team has improved even within the last week, and just wants to keep the momentum moving in the right direction.