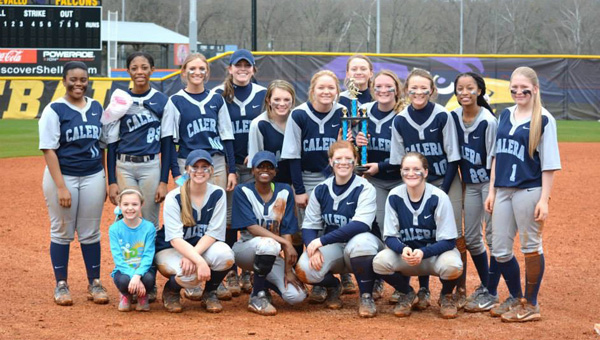 The Calera Lady Eagles won the Montevallo Invitational Tournament over the weekend of March 13-15. (Contributed)

MONTEVALLO – Over the course of a 24-hour period, the Calera Lady Eagles softball team went 4-1 in the Montevallo Invitational Tournament, which was good enough to win the tournament. Calera lost the first game of the tournament badly to Jemison by a final of 8-0, but found redemption in the championship game when they defeated the Lady Panthers to claim the championship by a score of 5-6.

After dropping the first game to an upstart Jemison team Calera responded later in the evening to beat Holt and climb back to 1-1 on the tournament. The next morning the Lady Eagles hung 16 runs on a hapless Vincent squad to win that contest. Calera then turned around quickly from their contest with Vincent and defeated Montevallo by the smallest of margins, winning 6-5. The win against Montevallo set up a rematch with Jemison in the championship game.

Ashlynn Hamm took the mound to start the contest for Calera, and lasted 1.2 innings and gave up three runs on three hits. Emily Sanders came in after Hamm and finished the game for the Lady Eagles, which needed extra innings to decide.

In the bottom half of the sixth inning, Calera trailed 4-0 and had been held at bay for the most part by Hannah-Rose Corbin, who pitched a complete game for Jemison. In the bottom half of the sixth, however, the first five batters who stepped up to the plate all got hits, and when Emily Sanders hit a double late in the inning, Cameron Odo and Somer Roberson came around to score to bring the score to 4-2.

In the bottom half of the seventh with the score still 4-2, Skyler Laird singled with one out and was brought home when Shelby Wright hit a double to right field. Wright subsequently scored when Hamm smacked a double, which was enough to send the game into extra innings.

After Jemison scored one run in the top of the eighth, Calera responded with two runs in the bottom half of the game to win the game and the tournament, and advanced to 9-2 on the season.

Lauren Lilly (with ball) averaged 16 points and 5.4 rebounds per game during her freshman season at Montevallo. She has... read more