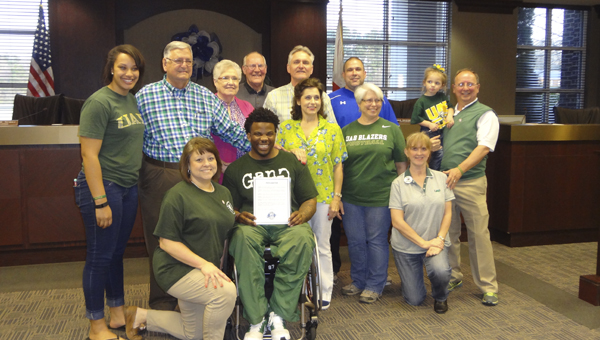 The Chelsea City Council approved and presented a proclamation to former UAB football player Timothy Alexander in support of the school’s football program, which was shut down in December 2014. (Reporter Photo/Emily Sparacino)

CHELSEA – Timothy Alexander is one of many people that want the University of Alabama at Birmingham to reinstate its football program.

Alexander, a 26-year-old graduate student at UAB, addressed the Chelsea City Council at a meeting March 17 to explain why he was seeking the city’s support in bringing back the UAB football program, which was shut down in December with the bowling and rifle programs.

For Alexander, the football team was more than an activity. It was a second chance at his future.

“I’m the first paraplegic to be on the UAB football team,” Alexander told the council.

On Oct. 28, 2006, Alexander was severely injured in a car crash, paralyzed from the neck down.

The No. 8-ranked tight end and wide receiver from Center Point thought his plans to play college football were over.

“I thought, ‘Why me?'” Alexander said. “How could this happen to someone with so much going for himself?”

But UAB still wanted Alexander and offered him a spot – and a scholarship – on the football team.

“They’re more than my teammates,” Alexander said. “Those are my brothers.”

Alexander has regained use of his arms and can stand from his wheelchair.

Alexander graduated in December and is currently working on his master’s degree at UAB.

“At the end of the day, UAB is for Birmingham,” Alexander said. “We are for Chelsea.”