‘It makes you proud:’ Community rallies around Galloway 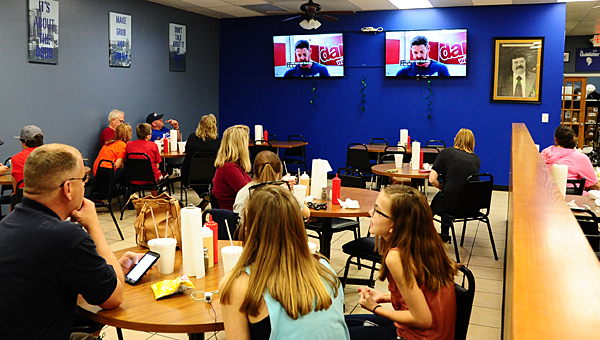 Supporters gather at Alabaster’s Chubb’s Grub Station to watch Noah Galloway perform on “Dancing with the Stars” on the night of March 16. (Reporter Photo/Neal Wagner)

ALABASTER – Chubb’s Grub Station owner Will Cholewinski gazed out over the about 50 patrons gathered in his restaurant on March 16 to watch the “Dancing with the Stars” debut of Alabaster’s own Noah Galloway.

“It’s a pretty good crowd for the first night,” Cholewinski said, taking a break from preparing food in the restaurant’s kitchen. “I think the crowd will grow as he moves on to the final few rounds, like they’ve projected he will.”

Chubb’s, decorated with signs reading “Vote 4 Noah and Sharna” and “We love Noah,” served as a gathering place for Galloway’s fans to watch his Hollywood debut on the show’s 20th season.

Galloway, a former Army sergeant who lost portions of his left arm and leg in a 2005 explosion in Iraq, has been paired with professional dancer Sharna Burgess in the show.

Burgess and Galloway will compete each week in front of a judging panel. Each week throughout the season, the dancer with the lowest score – which is calculated by the judges and by viewer votes – is eliminated from the competition. On March 16, the team earned a 26 out of 40 from the judges, placing them near the middle of the pack.

“This is the first time tonight that I’ve seen the kind of connection that you need in this competition. It’s beautiful,” Hough told Galloway. “We obviously know what your challenges are, but I hope that everybody who’s watching this … they know that for a man to lead, it’s usually with the left arm. And so for Sharna, the creativity with that choreography is so beautiful.”

For those gathered at Chubb’s to watch the show, Galloway was second to none.

“He’s such an inspiration, he really is,” said Alabaster resident Irene Bell. “He just makes you think everything that you go up against in life, he makes it look like nothing compared to what he goes up against. It makes you proud to be from Alabaster, doesn’t it?”

Carolyn Pool said she was even more impressed after hearing Hough’s comments.

“I didn’t realize men led with their left arm, I had no idea,” Pool said. “I think it’s amazing whoever you are, but the fact that he’s hometown and he’s done so much, it’s just wild.”

For Rose Cholewinski – Will Cholewinski’s mother – the show is helping to expose an American hero.

“It was awesome. I think the people there (at the filming) show what we in Alabaster already know about him,” Rose Cholewinski said.

The Pelham City Council passed a resolution March 16 in support of the Pelham Board of Education paying off leverage... read more