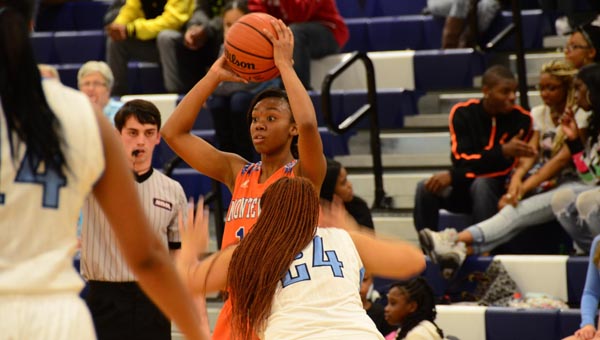 Lauren Lilly (with ball) averaged 16 points and 5.4 rebounds per game during her freshman season at Montevallo. She has been named the Shelby County Player of the Year for 2014-15. (File)

Basketball season is over, and the impending offseason will be long and will move community attention away from the court and towards the baseball diamond, the soccer pitch and the football field. Before the book is completely closed on the 2014-15 season, the last piece of business is to recognize those athletes who stood out against their competition, were able to showcase their skills and became the most productive and valuable players in the county. Last week the boys were highlighted, now its time to turn attention to the girls.

Coach of the Year

Josh Golden, Thompson Lady Warriors. Coach Josh Golden kept his Lady Warriors squad consistently at the top of Class 7A for the entire season. Playing in an area alongside perennial 7A powerhouse Hoover, Golden led Thompson to a 26-8 record and defeated the Lady Bucs on their home floor on Jan. 13. The Lady Warriors lost a heartbreaker in the Northwest Regional semifinal to Hazel Green on a buzzer-beater to end their season, but Golden and Thompson still wielded one of the most formidable rosters in Shelby County and were consistently ranked in the top 10 of 7A in the state. Not only was the Thompson roster especially skilled, Golden used his roster especially well, and implemented a pressure defense and a skilled offense to get the most out of his players.

Player of the Year

Lauren Lilly may only be in her freshman year at Montevallo, but the young guard plays with the poise and skill of a seasoned veteran. Lilly was capable of reaching a gear most of her competitors simply could not during the 2014-15 campaign. She averaged 16 points per game, connecting on an incendiary 49.7 percent of her field goal attempts, to go along with her 5.4 rebounds and 2.3 steals per game. Lilly led the Lady Bulldogs to the 5A Sweet Sixteen, the first appearance for Montevallo since 2010, according to head coach Tena Niven. The young guard has three years left at Montevallo, and will continue to lead the Lady Bulldogs for years to come.

The rest of the All-County nominations are as follows