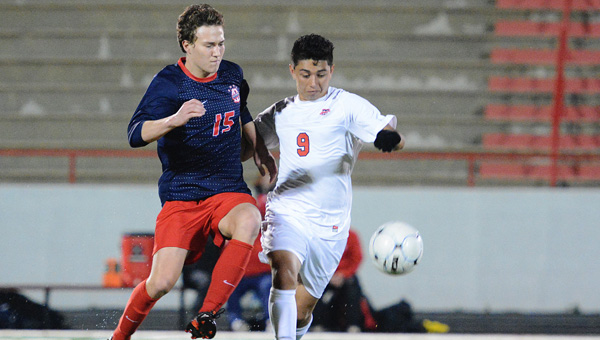 ALABASTER – The Thompson boys and girls soccer programs hosted Oak Mountain on Friday, March 13. The girls took the field first, and the game was evenly played throughout the first half with neither team conceding a goal to the other. Thompson came into the contest at 9-2 on the year behind stellar play from a roster comprised of only three seniors and a number of underclassmen. Oak Mountain is coming off one of the most historic seasons in Alabama soccer history, achieving a 26-0-2 mark and winning the 6A state title as well as being crowned national champions by Maxpreps.com. The two schools are both in the upper echelon of 7A programs this year, and this early season matchup was a potential precursor to a playoff matchup down the line.

The two teams went into the half at a 0-0 stalemate before Oak Mountain broke the tie. Nealy Martin, the junior defender for Oak Mountain scored on a Herculean effort from beyond midfield midway through the half to notch the only goal of the day and give David DiPiazza’s team the win.

The boys game followed and provided more goals on a rain-soaked field. Thompson jumped on the visiting Eagles team with two quick goals in the first half to take a 2-0 lead early in the contest. Directly after the Warriors second goal, however, Clay McDonald carried the ball downfield and pushed one past the Thompson keeper to bring the game back to within one goal. The Eagles would add another first half goal to bring themselves all the way out of the early hole and went into halftime with a satisfying 2-2 tie.

Thompson did not falter in the face of the comeback put on by the Eagles in the early second half, and the score remained deadlocked at 2-2 until less than 30 minutes were left on the clock. The senior McDonald was not to be denied, however, as he scored his third goal of the game soon after to give Oak Mountain their first lead of the night. Hunter Ratliff added a goal of his own to go along with McDonald’s three scores late in the half, and Oak Mountain escaped with a 4-2 win.

Lauren Lilly (with ball) averaged 16 points and 5.4 rebounds per game during her freshman season at Montevallo. She has... read more