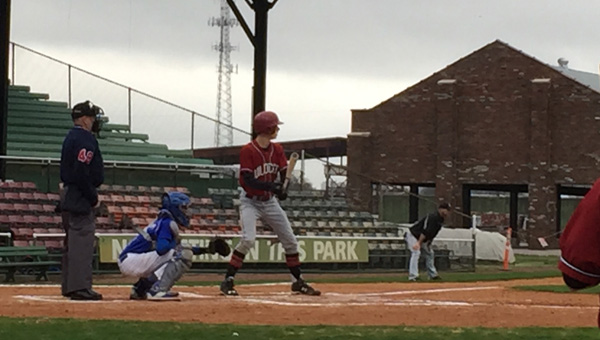 BIRMINGHAM – Shelby County High School traveled to Rickwood Field on March 13 to play Ramsay High School in a doubleheader. Rickwood Field opened its doors on Aug. 18, 1910, and in the park’s time as the home of the Birmingham Barons saw future greats such as Satchell Paige, Stan Musial and Willie Mays don a Barons uniform, according to Rickwoodfield.com. Spencer Dill started on the mound for the Wildcats and put in a five inning, complete game effort where he struck out four and gave up three hits and one run.

The Wildcats scored another run in the second as well as three more in the third inning to take an 8-1 lead moving into the fourth inning. The score held steady for only one more inning before the Shelby County bats swung their way to three more runs in the fifth, bringing their run total to 11. With the run differential of at least 10 in the fifth inning, the game was called and Shelby County was declared the winner. The two schools did not play the second game of the doubleheader as there was an issue with the lights at the field.

Dill also shined from the plate, going 3-4 with three RBIs on the day. Nick Lowery went 2-4, as did Adam Landefeld. Kyle Cofer drew three walks on the day and scored as many times.

With the win, Shelby County improved to 7-2 on the year.