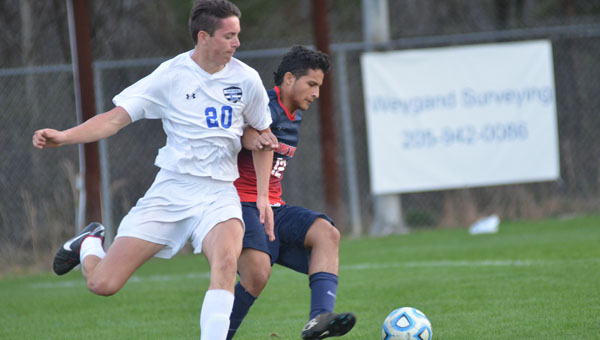 Hunter Thomas of Chelsea (left) fights for possession of a ball in the Chelsea attacking third during their March 17 3-0 loss to Homewood. (Reporter Photo / Baker Ellis)

CHELSEA – A night after Chelsea goalkeeper Markus Frederick tied the school record for saves in a game with 20, the Hornets welcomed visiting Homewood onto their pitch in their second game of the 2015 Metro Tournament. Homewood, the defending state champion in 6A, was held without a goal until the second half, when fatigue set in for Chelsea, and the Patriots were able to knock home three second half goals to win 3-0.

After a scoreless first half that saw both teams control possession for varying amounts of time, Chelsea came into the second half hoping to squeak one by the more well-rested Homewood squad.

“Considering we had Vestavia last night and Homewood had a day of rest, we feel fairly positive,” Chelsea head coach Wiley Miller said after the game.

Eight minutes into the second half, Homewood got on the board. A nifty cross found the forehead of a Homewood striker who knocked the ball into the back of Chelsea’s net, which made the score 1-0.

After a Chelsea corner later in the half was knocked away, Homewood was able to carry the ball all the way down the field in a matter of seconds on a counterattack that surprised the Chelsea defense and gave Homewood another opportunity to score, which they took to advance their lead to 2-0. Another goal late in the half brought the final score to 3-0 in favor of the Patriots.

“They’re a good team, they’re defending state champions,” Miller said. “We’re young and have a good team but we are in the ‘growing-up’ process still. We don’t like losing, but we feel fairly positive (about the result).”

Chelsea fell to 5-5 with the loss, their third loss in a row after winning their three previous games in a row.