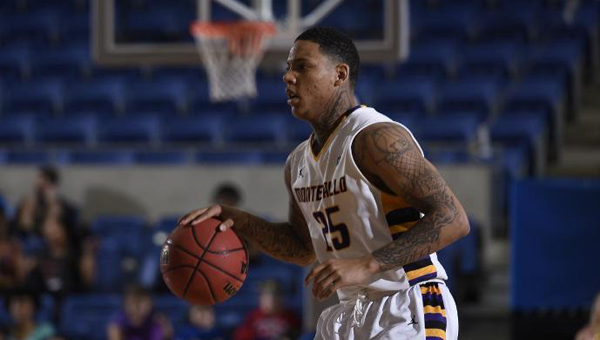 Troran Brown and the Montevallo Falcons saw their season come to an end on March 17 in the NCAA DIv. II Sweet Sixteen at the hands ofThe University of Mount Olive. (Contributed)

HARROGATE, Tenn. – After advancing to the eighth Sweet Sixteen in school history, the University of Montevallo men’s basketball team fell to Mount Olive on March 17 in the Southeast Regional championship game, 82-75.

The UM shooters got into a rhythm early on. By the first media timeout, the starting backcourt of Ryan May, Troran Brown, and Shykeem Jackson had each hit a three-pointer. In fact, Jackson made each of his first two attempts, and the Falcons started the game a perfect 4-for-4 from beyond the arc.

When the first half ended, Montevallo was on top 43-39. The Falcons held the lead for more than 17 minutes in the first half. The combination of May, Brown, and Jackson combined for 30 of the 43 Montevallo points, shooting 60% from three-point distance.

Conversely, Mount Olive was held to just 1-for-10 shooting from beyond the arc. The Trojans, however, were able to get to the free throw line and convert on their opportunities for extra points.

Montevallo opened the second half on a 15-6 run to extend the lead to 13 points.

After a few minutes of even play, Mount Olive made its move, going on a 12-0 run that culminated with a Jaquan Blount three-pointer that gave the Trojans their first lead since two minutes into the game.

Mount Olive went on to maintain the lead over the final minutes of play and won the Southeast Regional Championship, 82-75.

After only making one of their first 12 three-pointers in the game, the Trojans closed the game making their final five shots from deep.

Mount Olive shot 73.7% from the floor in the second half.

Down three with just over a minute to go, Montevallo had three looks to tie the game, but the senior trio of guards could not come up with one more make from beyond the arc.

Brown finished the game with a team-high 21 points, shooting 50% from the field and from three.

Montevallo finished the season 26-9. The Falcons swept the Peach Belt Conference championships this year, winning both the regular season and tournament titles.