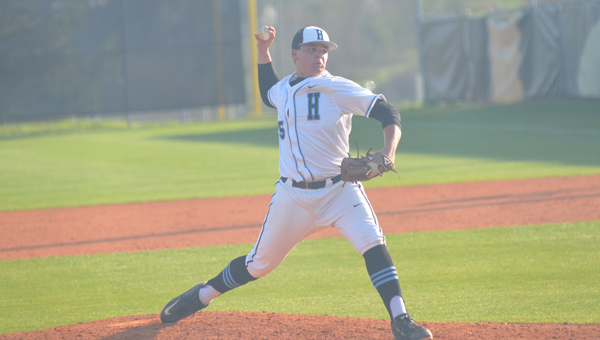 Brooks Freeman of Helena pitched a complete game in the first game of a doubleheader on March 17 against Pelham. Freeman and the Huskies won the first, but dropped the second and the schools broke even on the day, each winning one game. (Reporter Photo / Baker Ellis)

PELHAM – Brooks Freeman and Sam Finnerty were the focal points of a stellar pitching duel in the first game of a doubleheader between Pelham and Helena on March 17. Both pitchers threw complete games, and both kept their pitch counts below 80, however Freeman and the Huskies were able to squeak out the first game of the doubleheader against the second-ranked squad in 6A, Pelham. The Panthers got some measure of redemption, as they turned around and won the second game on the backs of Tyler Wilburn and Cole Whitman.

Freeman and Finnerty both dazzled on the mound in the opening game, and all three runs that were scored came off solo home runs. The two had almost identical games. Freeman threw 72 pitches while Finnerty threw 79. Freeman gave up four hits while Finnerty gave up six. The only difference in the game was that one more Helena batter got hold of a Finnerty pitch than vice versa. Sam Praytor teed off on the third pitch of the fourth inning for Helena’s first homer, and was followed one inning later when Jake Busby rode one out of the park as well. Tyler Wilburn followed suit for Pelham in the bottom of the fifth, but the score would hold fast at 2-1, giving Helena the first victory of the doubleheader.

Wilburn pitched five innings for Pelham before Whitman came on the mound and threw two scoreless innings in relief to give the Panthers the win. Riley Davis and Brooks Brophy were the two pitchers for Helena in the second game.

The Huskies took a 2-1 lead into the third inning before the Pelham bats began to pop. Finnerty took the first pitch of the bottom half of the third inning and sent it sailing over the wall to bring the Panthers back to even at 2 runs apiece. Two more fourth inning runs and a sixth inning run helped Pelham put some distance between themselves and Helena, and they redeemed their loss with a 5-2 win.

Pelham moved to 12-4 while Helena moved to 8-8 after the doubleheader.