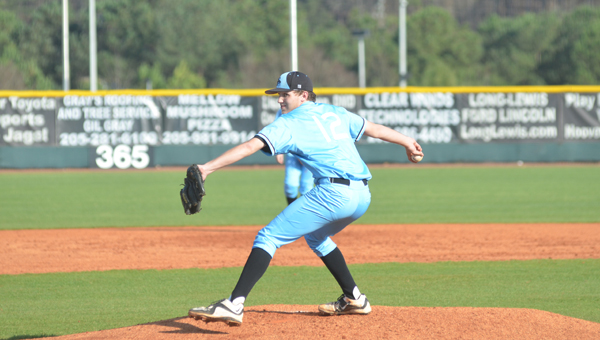 Quinton Hoffman hurled four innings for Spain Park in the first game of a doubleheader with Chelsea on March 17. The Jaguars won both games. (Reporter Photo / Baker Ellis)

HOOVER – The Spain Park Jaguars extended their winning streak to seven games with back-to-back wins over the Chelsea Hornets in a doubleheader Tuesday night at Jaguar Stadium.

In the first game, Spain Park was ahead 3-1 after four innings, but the Hornets took the lead with a three-run fifth. The Jaguars answered with three runs of their own in the bottom half of the inning to take the lead.

Chelsea loaded the bases with two outs in the top of the sixth inning, but the Hornets failed to take advantage of the opportunity. Spain Park picked up two more runs in the bottom of the sixth, and went on to win the first game 8-5.

Tyler Wise was 4-4 with 3 RBI’s and scored three runs for the Jaguars, while Drew Hawker added three RBIs of his own.

In game two, the visitors found themselves up 3-1 after the first inning, but the lead would not last long as the Jaguars sent thirteen batters to the plate in the second, leading to seven runs scored and a five-run lead after two innings.

The Jaguars’ bullpen was dominant, allowing only five Chelsea base runners over four shutout innings.

Chelsea’s Jacob Green had one hit, two walks and two stolen bases to lead the Hornets.

Hunter Thomas of Chelsea (left) fights for possession of a ball in the Chelsea attacking third during their March 17... read more