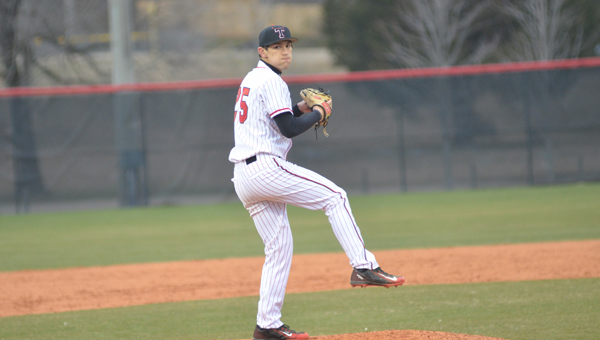 Stephen Poplin led Thompson to a win in the first game of a doubleheader with Auburn on March 17. The Warriors won both games by a combined 18 runs. (File)

AUBURN – Thompson advanced to 13-3 on the year after beating the sixth-ranked team in 7A, Auburn, twice by a combined score of 29-11. Stephan Poplin pitched the first game in a complete-game effort, allowing two runs on three hits and throwing 80 pitches through six innings. Lance Johnson and Tyler Hosmer combined to fend off Auburn in the second game as the Warriors swept the series.

The Warriors scored 10 runs in the last three innings of the game to drive the nail into the coffin of the first game. Poplin held the Auburn bats in check for the entirety of the first outing, but the score remained close at 2-1 in favor of the Warriors until the fourth inning when Thompson drove in five runs. Three walks and three hits in the inning were the causation of the runs, and doubles by both Heath Haskins and Poplin in the inning drove home three of the five runs.

Riley Reach led all batters in the first game, going 3-4 from the plate and driving in one run.

The first inning of the second game saw a combined 15 runs cross the plate. Thompson led off the game and scored eight in the first inning before Auburn turned around and scored seven runs of their own in the bottom of the first. Alex Carter highlighted the inning for the Warriors, dropping a bomb over the left field fence late in the inning to bring in the final two runs of the inning.

After the first inning, Auburn cooled off significantly, but Thompson did not. The Warriors would add eight more runs over the course of the next three innings, including a solo shot by Haskins in the third, compared to Auburn’s one run to double their lead to 16-8. Both teams would add another run late in the game, and Thompson would complete the two game sweep and move to 13-3 on the year.

Alex Carter, Lance Johnson and Collin Lillie each recorded three hits in the second game to lead the way for the Thompson bats, who notched 16 hits in total in the second contest.