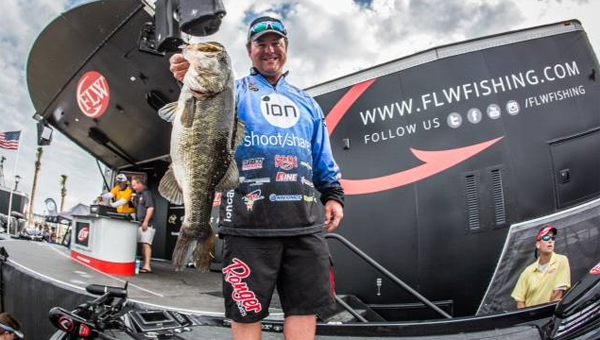 Shelby County’s own Barry Wilson competes on the FLW Tour, the largest professional fishing circuit in the nation. (Contributed)

Barry Wilson of Shelby County seems to be living the dream of every red-blooded southerner. He gets paid to win fishing tournaments at the finest watering holes this country has to offer. In just three years, he has made a name for himself in the world of professional fishing and continues to add to his growing legacy.

It all began back in 2012 when Barry was 39 years old. At the time he was in pharmaceutical orthopedic sales and was growing tired of the mundane, and needed something to quench his competitive appetite. “I was a running back at Auburn under Pat Dye,” said Wilson. “Until I got hurt in two consecutive years. That ended my career. I still had the drive just not the speed.” In lieu of football, Wilson channeled his competitive spirit toward professional fishing with the support of his wife.

Wilson eased his way into his newfound profession when he started competing in local BFLS tournaments. From there, he quickly worked his way up into the nationwide FLW Tour tournaments where he would brush shoulders with the who’s who of trawlers and rodmen. “I was star struck my first time in South Carolina,” Wilson said. “These were the same guys I would watch on TV and here I was competing against them.”

He would place 60th of 2,000 in his first major tournament and was awarded $4,000. Another early successful bout took place in Champagne, New York where he placed 12th overall. “That’s what kick-started it for me. That’s when I realized I could fish with these guys,” Wilson recalled.

His early success proved not to be a fluke as he now has netted a total of 23 sponsors, which he believes, is essential to survive in the world of fishing. “You can’t just try to live on the winnings. You have got to get sponsors or you are not going to make it,” Wilson said. In fact, he advises aspiring professionals to have a degree to fall back on before they seriously consider getting out on the water.