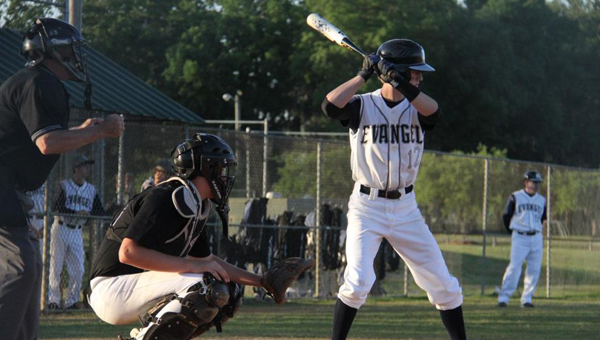 Andrew Thompson and the Evangel baseball Lightning won four games from March 14-16 by a combined score of 47-3. The Lightning advanced to 9-0-1 after the two-day stretch. (File)

ALABASTER – From March 14-16, the Evangel Academy baseball Lightning played a total of four games and won them all by a combined score of 47-3 to improve their overall record to 9-0-1.The incendiary scoring total is not out of the ordinary for this Evangel squad, as they have hung double-digit scoring numbers in every game since the first game of the season, where they tied North River Christian 3-3.

Stephen Cullen and Luke Smoke combined to pitch five scoreless innings for the Lightning in the first game of a March 14 doubleheader with Success Unlimited Academy. The Lightning erupted for 12 runs in the first inning, and scored five more over the next three innings to bring their total run count to 17. The game was called in the fifth due to the lopsided score.

The second game of the day ended in much the same fashion as the previous. Satcher Wells pitched a five-inning, complete game shutout and the Lightning scored 10 runs in the first five innings while holding visiting Success Academy scoreless to win 10-0. Koty Watts led the way for Evangel from the plate in the second game, going 3-4 from the plate with an RBI.

In only the second game all season where the Lightning have been pushed to complete a seven-inning game, Andrew Thompson and Matthew Earwood each took the mound for Evangel in the winning effort. Evangel used a big second inning where they scored seven runs to put a healthy distance between themselves and the visitors. Jacob Albright and Hahn Lau both went 2-3 from the plate to lead the Lightning bats in the game.

The Lightning returned to their habit of winning games in less than seven innings in the second game, as they beat the visitors in five innings. Earwood and Watts took turns on the mound and neither allowed a hit in the shutout. Lau continued his exceptional hitting on the day, and finished 3-3 in the second game to bring his daily total to five hits on six at-bats.

Pelham head basketball coach Joel Floyd continues to coach after the high school season is done. He is in his... read more