Fitzgerald, Knights hoping to be special 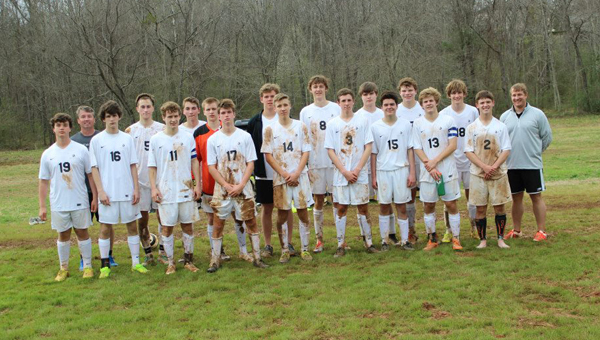 The Westminster School at Oak Mountain boys soccer team is the top-ranked team in the state in class 1-3A by Eurosportscoreboard.com and is hoping to get back to the state finals, where they lost two years ago. (Contributed)

Patrick Fitzgerald is in his third season as the head coach of both the boys and girls soccer teams at Westminster School at Oak Mountain. The girls program is in its inaugural year as a varsity squad, and Fitzgerald sees great potential with his girls team.

“We’re putting in a system and figuring that out,” Fitzgerald said in a March 19 phone interview. “We’ve got some tremendous athletes and they’re working very hard.”

It is the boys team this season that is making waves, however. Currently the top-ranked team in the state in class 1-3A by Eurosportscoreboard.com with a record of 6-0-2, if the Knights haven’t began to garner statewide attention, they soon will.

Led by a senior trio of Jack Stein, Michael Stanford and John Fitzgerald, the Knights are focused on returning to the state finals, where they were beaten two years ago by Collinsville in Fitzgerald’s first season manning the helm.

“It’s our goal (to get back to the state finals),” Fitzgerald said. “We have to knock off current state champion Indian Springs first.”

Indian Springs, currently ranked second in the state by Eurosportscoreboard.com, was the culprit responsible for knocking the Knights out of the state tournament last year, a fact Westminster has not since forgotten. In this, the third year of Fitzgerald’s tenure at the helm, he believes the rewards are more easily seen.

“I think this has been a payoff year,” said Fitzgerald. “We’re seeing a lot of the groundwork we’ve laid over the last two years lead to success.”

While Fitzgerald, a Memphis native and former banker, is the head coach of both squads, he relies on the help of Matt Register to assist with the boys team and Amanda Abbott and Karen Wert to help the girls. “All of them are very qualified,” Fitzgerald said.

With the combination of senior leadership and skilled underclassmen, the goal for this year’s boys team is to return to the state finals and hopefully bring a title back to Westminster, Fitzgerald wants his team to take the season one game at a time, and hopefully they’ll still be playing come May.