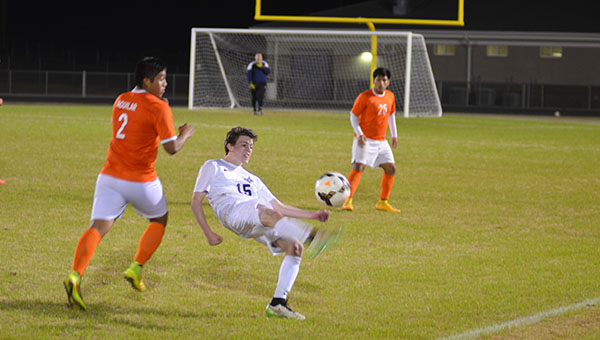 The Helena Huskies and Fultondale Wildcats faced off on Wednesday, March 18 at Helena High School. Neither team could score a goal resulting in a 0-0 draw. (Reporter Photo/Graham Brooks)

HELENA–The Helena Huskies Varsity Soccer team squared off against the Fultondale Wildcats and neither team could break through and score a goal, resulting in a 0-0 tie.

Both teams had opportunities to score, but each time, goalies from both teams were able to stand tall and defend their goal.

“Both teams had some good opportunities and it was a well-played game and that’s what I’m happy about,” Helena head coach Zach Morgan said after the game. “Both teams played well and came out and tried to win the game.”

Fultondale came out and tried to attack from the outsides during the game but the constant substitutions by Morgan kept fresh legs in the game for Helena and prevented Fultondale from breaking through for a goal.

“Things that I think we did well was in the second half we made some adjustments and I told them to be quicker and go and get the ball and stop watching the ball and they did that,” said Morgan. “I substituted a lot and I tried to keep the fresh legs because they were trying to attack on the outsides.”

Helena has been playing in the Metro Soccer Tournament this week but were put out a few days ago after a loss to Indian Springs.

The recent weeks of bad weather have caused some rescheduling and the Huskies were glad to get back on the field and compete on a gorgeous night for soccer at Helena High School.

The Huskies will take on Mountain Brook on Friday, March 20 in an exhibition game.

Brooks Freeman of Helena pitched a complete game in the first game of a doubleheader on March 17 against Pelham.... read more