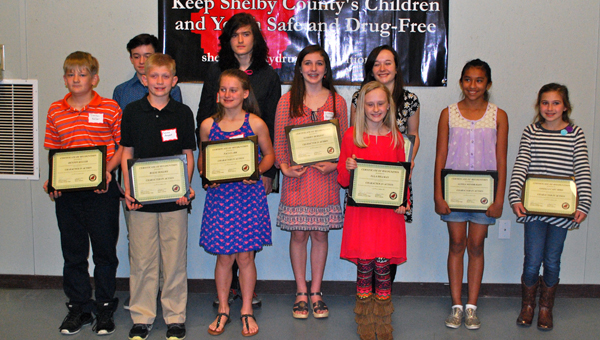 “(The awards) were created to acknowledge those who are going above and beyond the norm and setting good examples for others to follow,” Littrell added.

In her nomination form, teachers noted Waller’s ability to balance athletics, theater and academics while still finding time to help those around her.

“She is eager to do anything that is asked of her and truly displays servant leadership,” the form said of the CHHS sophomore. “Most students have to be motivated to do the right thing, but Brantley does these things naturally because she knows it is the right thing to do.”

Bergert’s teachers at CHMS highlighted her happy disposition and kindness.

“Lindsey befriends students, making them feel comfortable and valued,” her nomination read. “Lindsey would probably not consider herself a ‘leader’ in the traditional sense, but her quiet actions speak louder than any words.”

Rodgers was commended for his respect, maturity and courage to stand up for what is right.

“Many children his age are hesitant to call out behavior that is inappropriate for fear of not fitting in or putting a target on their back, but Reese has shown incredible maturity in situations like this and will not compromise his values when put under pressure,” his nomination form stated.

“Will always has a kind word for everyone—he is the first to speak in the hallways to adults and also to new students in need of a friend,” the nomination form detailed. “Will inspires me to be kinder to my students, to be patient and gracious—and for a middle school kid to demonstrate that kind of character shows tremendous courage.”

Clark was recognized for her drive to go “above and beyond to help others” and initiative in organizing a Pink Out Day to raise support for breast cancer awareness.

“Paci is always willing to be a buddy/helper to new students,” Clark’s nomination form read. “She stands up for kids and is a friend to those who need one.”

Hillman’s teachers at FOES noted her respectful demeanor, good manners and resolve to stand up for her peers. Earlier this year, Hillman organized a school-wide fundraiser to support St. Jude’s Hospital.

“Ella is definitely a leader among her peers,” her nomination stated. “She has the courage to stand up for what is right, even if the right thing is not popular.”

Cazcarro was recognized for her responsibility, compassion and perseverance.

“She has a positive attitude and never gives up on the task at hand,” the nomination form read. “She sets good examples and makes good choices for others to follow.”

SCHS teachers highlighted Pickens for his “caring spirit,” ability to balance his passion for music and academic commitments and his maturity.

“He treats everyone in a manner that represents himself, his parents and his school very well,” his nomination form stated. “He offers a caring spirit without judging those around him.”

Mondragon was commended for her diligent attention to schoolwork and kindness to her peers.

“Alyssa is a student who will not do anything less than her very best at every task,” Mondragon’s nomination form read. “Through her own behavior, she provides a clear example of how to treat others with kindness and shines as a leader.”

Keller was described as a “southern gentleman,” and his teachers at WES noted his integrity, service and support of his peers.

“Denton takes pride in the routine that he has developed to help him stay organized and prepared for school,” Denton’s nomination form read. “Denton’s teachers describe him as ‘a friend to the friendless.’”

Get muddy at the Mudder for Missions, March 15

The third annual Mudder for Missions run will be March 15 in Wilsonville. (Contributed) By MOLLY DAVIDSON / Staff Writer... read more