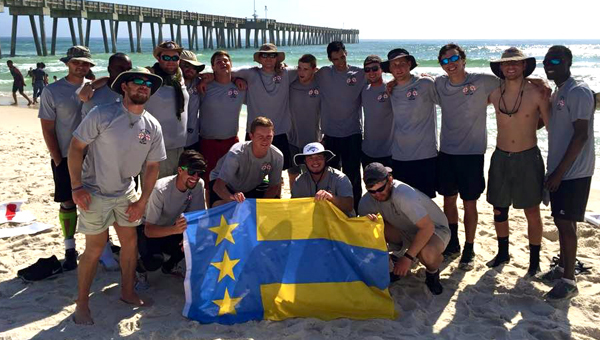 Chelsea native, Will Pouncey, spent his spring break walking 128.3 miles to raise money and awareness for the Wounded Warrior Project. He walked with 17 of his fraternity brothers from Troy University. (Contributed)

Like many other college students, Will Pouncey traveled to Panama City Beach, Fla., for spring break, but unlike many other students, Pouncey made the 128.3-miles trip from Troy University on foot.

Pouncey, a Chelsea native and Coosa Valley Academy alum, and 17 of his fraternity brothers completed the six-day, five-night walk as part of the Walk Hard philanthropy project to raise money and awareness for the Wounded Warrior Project.

“It was really tough, mentally and physically,” Pouncey said of the experience. “You don’t realize how much it hurts just to walk.”

Pouncey and his ATO brothers set out from the Troy University quad at 8 a.m. March 6. They spent each day walking and spent nights at various churches and YMCAs before arriving at Pier Park in Panama City Beach, Fla., on March 11.

“They took really good care of us, fed us and gave us a place (to sleep),” Pouncey said of the places they stopped each night.

Walking the 128.3-mile trail definitely took a physical and psychological toll, but Pouncey said the support he and his classmates received along the way helped carry them through.

“There were people all along the way (cheering us on), it was really something else,” Pouncey recalled. “The last two miles of the walk, (two wounded veterans) walked with me, it gave me that boost there.”

This is the sixth year the Troy University chapter of ATO has done the Walk Hard fundraiser, and this year’s event netted nearly $15,000 for the Wounded Warrior Project.

“It’s a big deal to us… It’s not just raising money, it’s putting an action toward it,” Pouncey said. “We’re still pulling in money now… It makes walking to Panama City worthwhile.”

More than a week after the walk, Pouncey said his feet, knees and ankles still hurt, but the experience was one he’ll never forget.

“All my brothers that ask me about it, I tell them, ‘You should definitely try it before you graduate, when you get to the end it’ll be worth it,’” Pouncey said. “That was six days out of our spring break, but it’s a drop in the bucket compared to what these (veterans) have gone through.”

3,500 pounds of trash cleared from Buck Creek and Cahaba River

Event Organizer David Butler stands behind just a portion of the trash that was collected from Buck Creek on Saturday,... read more