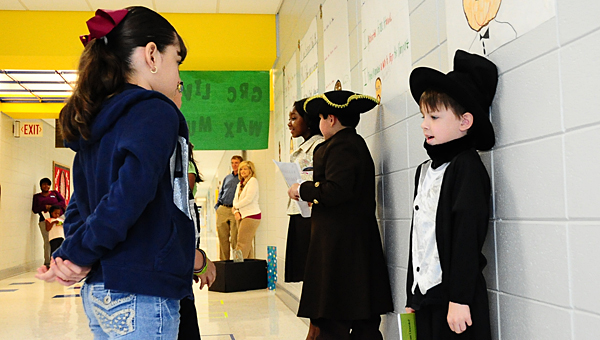 “It took a long time to prepare,” Gamble, dressed in formal business attire, said before a brief pause. “But it was all worth it.”

Gamble and dozens of her GRC classmates spent the week of March 16-20 portraying individuals who have changed the world through their actions.

While conducting the “living wax museum,” the students dressed as their chosen individual and stood in front of a sign displaying facts about the person. They stood motionless until a visitor stepped onto a tape square on the floor to activate the presentation.

School GRC teacher Lindsey Thigpen said the project began about a month-and-a-half ago when she challenged the students to research a current or historic person who caused significant change in the world through their actions.

“We didn’t want it to be all athletes,” Thigpen said. “The question was ‘How can I become an agent of change and discovery?’”

The students portrayed a wide range of historic figures such as Samuel Adams and Abraham Lincoln to more modern individuals such as Albert Einstein, Steve Jobs and Michelle Obama.

Each GRC student was tasked with preparing a speech explaining their character, and even created elaborate costumes to more closely resemble the person they were portraying.

“They are doing a great job,” Thigpen said. “They do great when their parents are here, but they do get a little nervous when their peers come through.”

Third-grader Luke Bowen, who portrayed Abraham Lincoln, said he combated the jitters by practicing at home before the program kicked off.

“I did it at my house with my parents first,” Bowen said in between visits from his classmates on March 20. “I wasn’t very nervous.”

Gamble said she was nervous at the beginning of the week, but quickly shed her fears as the event went on.

“My favorite part was getting to read about everyone and decide everything for ourselves,” Gamble said.