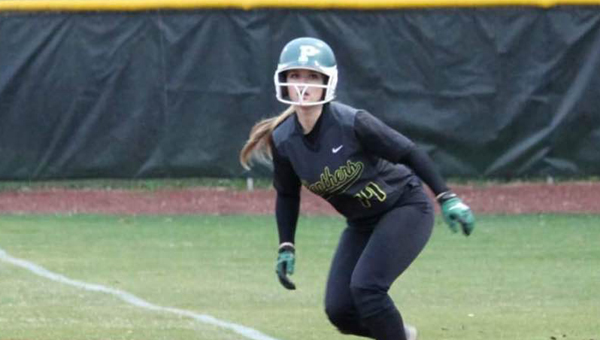 Steeley Martin and the Pelham Lady Panthers throttled Fairfield on March 17 by a final of 15-0. (Contributed)

PELHAM – With an offensive barrage in the second and third innings of the March 17 matchup with Fairfield, Pelham sprinted away from the visitors to win going away by a final of 15-0. Cadence Crocker and Hannah Pritchett both made appearances on the mound in the abridged game, which was cut short due to the early lopsided score. The two Lady Panther pitchers needed only 31 combined pitches over three innings to put Fairfield away, while the two Fairfield pitchers who took the mound combined for 99 pitches over the same time frame.

After a scoreless first inning from both teams, the Pelham bats erupted over the next two innings to get the win. In the second inning, where Pelham scored the majority of their runs, the Lady Panthers scored all 10 runs with two outs, as the first two batters in the inning were both retired. The next 13 batters who came to the plate either registered a hit, were walked or got hit by a pitch to lead to the crushing run total. Throughout the duration of the scoring barrage, no Pelham hitter hit anything other than a single, and every run was scored individually throughout the inning. Crocker, Steeley Martin, Pritchett, Dalton Merrill, Maddie Walker, Kacie Maher and Carly Edinger all registered hits in the inning, with Crocker and Martin registering two apiece.

After Pelham built their insurmountable 10-run lead in the second inning, they added five more runs in the third to end the game early and walk away with the 15-0 win.

Pritchett, Merrill, Maher, Crocker and Edinger all led Pelham from the plate, collecting two hits apiece. Walker and Martin also connected for a hit each to bring the total number of hits to 12 for the game through the three innings of play. Edinger also had three RBIs on the day.

By BAKER ELLIS / Sports Reporter VESTAVIA – On March 17, Briarwood its their eighth-straight game on the baseball diamond... read more