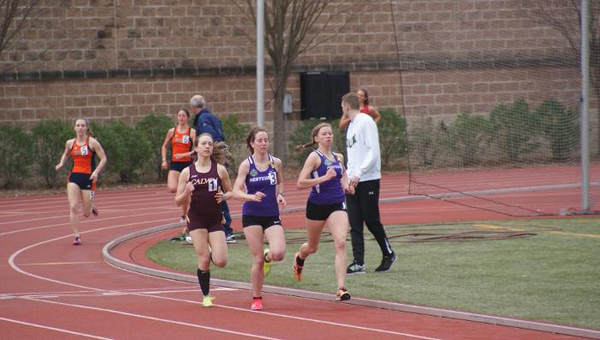 The Montevallo women’s distance medley team set a school record with a time of 12:09.92 in the Emory Invitational Meet on March 20-21. (Contributed)

ATLANTA, Ga. – The University of Montevallo women’s track and field distance medley relay team set a new school record with a time of 12:09.92 in the Emory Invitational meet March 20-21.

The Falcons’ quartet of sophomores Cheyenne Thompson and Anna Leinheiser and freshmen Ashlie Anderson and Shaina Cadet paced the Falcons in the unscored invitational after securing the individual title in the event with a time that beat runner-up Hope College by nearly one minute.

Freshman Yasmin Pettway set a new school record in the 100-meter hurdles event after capturing the individual title with a time of 14.52 seconds. Pettway edged second-place finisher Valerie Kirk of Cedarville by more than half a second.

Leinheiser finished second overall in the 1,500-meter run with her time of 4:41.54, setting a new school record in the process.

Sophomore Morgan Booth finished third overall in the javelin throw competition with her toss of 35.03 meters.

Freshman Sierra Millsaps finished fifth overall in the 10,000-meter run with a time of 39:35.57, while sophomore teammate Katherine Terino came in seventh overall with a mark of 39:51.97.

The Falcons’ entry in the 1,600-meter relay event, consisting of Cadet, Leinheiser and Pettway along with freshman Brianna Bryant, came in ninth overall with a time of 4:10.21.

Montevallo will return to action April 3-4 at the Hilltop Twilight Classic hosted by Birmingham-Southern College.

Troran Brown and the Montevallo Falcons saw their season come to an end on March 17 in the NCAA DIv.... read more